By now, we’re all aware that the coronavirus has no cure, and medications to treat COVID-19 remain a work in progress — but these home remedies mean you don’t have to just suffer through the symptoms if you do catch the virus.

Of course, getting vaccinated should be your first step, including a booster shot (two if you’re over 50 or immunocompromised). But if you do come down with a breakthrough infection, you should treat COVID-19 as you would the flu or the common cold: Rest, drink plenty of fluids, and ease the symptoms with over-the-counter medications — or even a prescription anti-viral (more on that below).

As always, see a doctor if your symptoms become severe, especially if you experience difficulty breathing or a high fever, for example. The list of symptoms has grown from three (cough, fever, and shortness of breath) to a whopping 11:

Luckily, many of us will suffer only minor symptoms, especially if we’re vaccinated, so we can simply ride out a bout with the coronavirus at home. We’ll just need to cope with the discomfort while our immune system does its job. 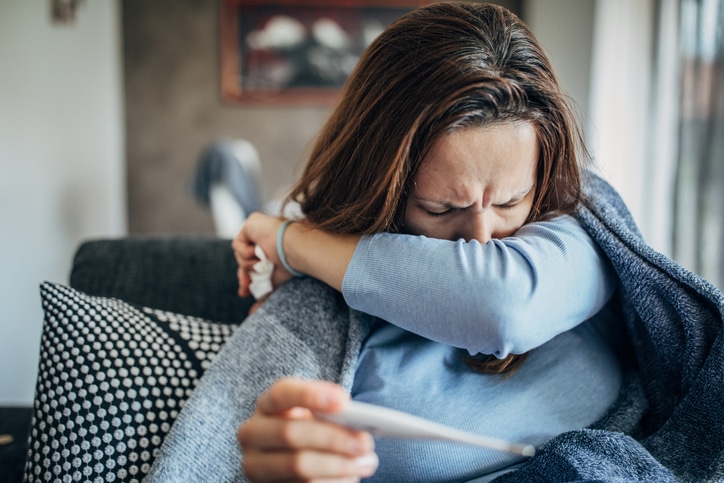 Staying hydrated is important to lowering a fever.

Acetaminophen is the only fever reducer he recommends for treating COVID-19, not Ibuprofen or Naproxen.

He urges anyone with liver disease to consult a doctor before taking Acetaminophen.

A dry cough can be one of COVID-19’s tell-tale signs, and hydration should help with that. So, too, can cough drops and some over-the-counter medications.

“If there is congestion in your chest, Guaifenesin tablets might help loosen the congestion,” Albrecht says.

If the cough is keeping you awake, he suggests a cough suppressant like Dextromethorphan.

But if that persistent cough causes a sore throat, home remedies can be effective.

“One of the best sore throat treatments is gargling with warm salt water,” Albrecht says. “A popsicle can also ease your symptoms.” 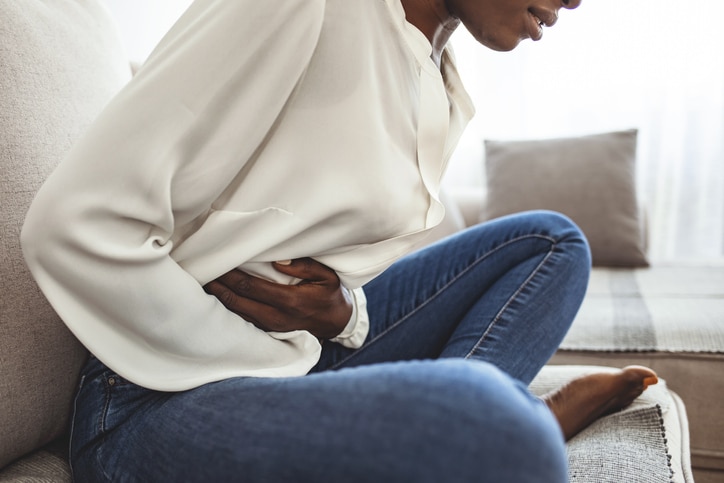 Gastrointestinal issues aren’t a sure sign of COVID-19 — but you shouldn’t just shrug these symptoms off either.

“The most common symptoms I’ve seen are nausea and diarrhea,” says Sripathi Kethu, MD, gastroenterologist on the medical staff at Methodist Richardson Medical Center. “We may need to monitor enzyme levels, but what we really have to pay attention to is diarrhea and vomiting. If severe enough, they can lead to dehydration or even kidney failure.”

Why a respiratory virus causes intestinal problems can be traced to inflammation. As the virus attacks the intestines, it can cause a severe form of inflammation in the colon known as colitis.

“Symptoms of colitis include diarrhea and bleeding in the stools,” Dr. Kethu says. “If the bleeding lasts more than two days, you should come to the hospital to get checked out. We need to do a colonoscopy to determine the extent of the blood loss and confirm that it’s COVID-19.”

Studies in China, where the pandemic began, show a third of people with a mild infection suffered from diarrhea that lasted about five days. In comparison, a routine stomach bug or food poisoning tends to last 48 hours.

The best way to treat these problems is by replacing the liquid you’re losing by drinking plenty of fluids, maybe even an oral rehydration solution from the drugstore. You should also stick to bland foods to give your digestive system a break.

And of course, stay home and be sure to wash your hands often. Consider designating a “sick” bathroom and bedroom.

Antibiotics are no good against a virus. They’re used to treat bacterial infections and should only be used as directed by a doctor. 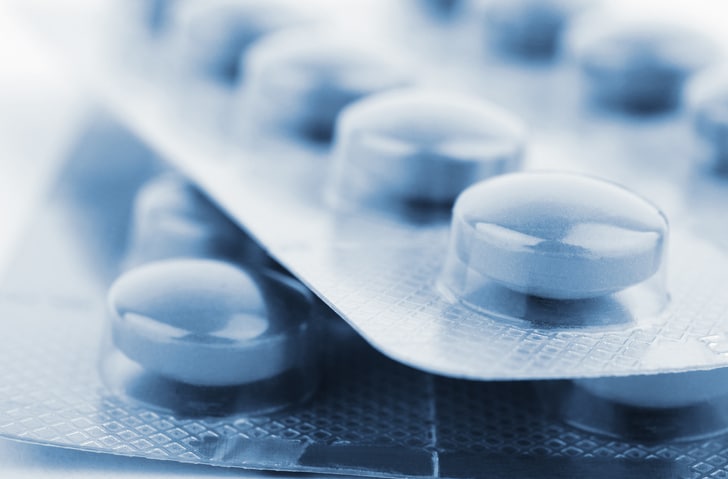 Authorized in December 2021, Paxlovid is the first anti-viral pill available for treating mild to moderate COVID-19 in adults and children at high risk for a severe infection.

The Pfizer-made drug — which combines two generic tablets, nirmatrelvir and ritonavir — is available by prescription only and should be administered within five days of developing symptoms. Like all anti-virals, it doesn’t do much good after that initial window passes.

Before being approved for emergency use, Pfizer reported that Paxlovid cut the risk of hospitalization or death by a whopping 89%. That study predates Omicron’s rise, but more recent studies suggest the anti-viral remains effective against the now-dominant variant. 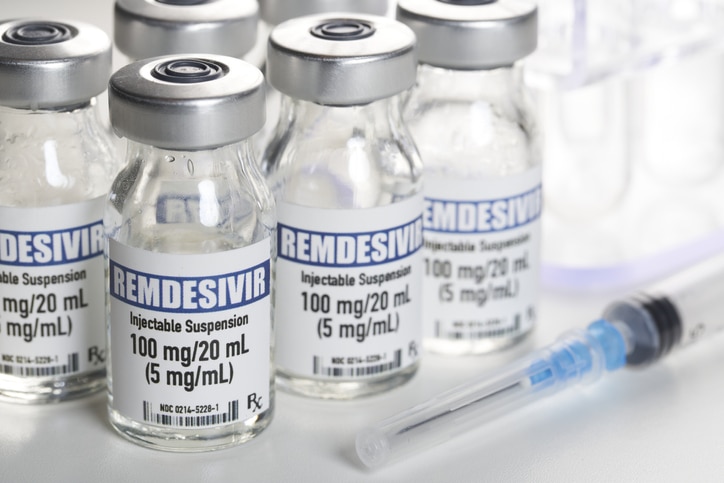 First authorized for emergency use in May 2020, the anti-Ebola drug Remdesivir, has been shown to reduce the recovery time and severity of COVID-19.

Remdesivir, developed by Gilead Sciences, is administered by injection or IV and remains the only drug therapy to receive full FDA approval. Patients treated with a three-day course of the drug in a recent study had an 87% lower risk of hospitalization or death.

In a medical trial conducted early in the pandemic that included patients hospitalized at Methodist Dallas, two-thirds of those who received Remdesivir had good results — and sometimes striking improvement.

“We have seen some extremely encouraging results where people on the verge of death were able to recover and leave the hospital,” says Parvez Mantry, MD, AGAF, FAASLD, CPE, executive medical director of the Methodist Health System Clinical Research Institute.

While initially Remdesivir was reserved only for hospitalized patients, that authorization was extended in January 2022 to anyone 12 and up who’s at high risk for COVID-19.

This prescription drug — like Paxlovid, it’s an anti-viral taken orally — was originally granted emergency use authorization (EUA) in December 2021 in a narrow vote by the FDA’s advisory committee.

Once heralded as a game-changer, the initial efficacy data showing the Merck-made drug reduced the risk of severe or fatal COVID-19 by half. The final analysis showed its efficacy to be closer to 30%. Regulators were also given pause when studies suggested the drug poses risks for pregnant women and their unborn children.

As a result of those concerns, the National Institutes of Health recommends the drug only be used when the preferred anti-viral therapies (namely Remdesivir and Paxlovid) are unavailable. 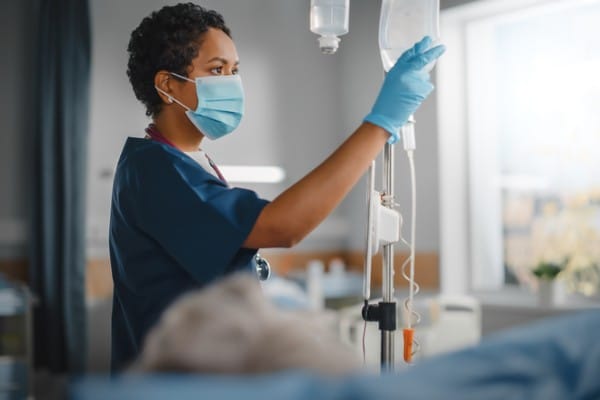 If prescribed soon after infection, monoclonal antibodies, or MoAbs for short, can be helpful to high-risk patients who meet certain criteria. Three such drugs had been granted emergency use authorization for treating a COVID-19 infection — until Omicron came along, that is.

Three MoAbs — Bamlanivimab, Casirivimab, and Sotrovimab — were initially found effective in preventing hospitalization and death from COVID-19. The new variant completely changed the calculus, however, and the Food and Drug Administration found all three original COVID-19 MoAbs to be ineffective against Omicron.

New hope arrived in February 2022, when the FDA issued an EUA for a new MoAb treatment — Bebtelovimab — for high-risk patients with mild or moderate COVID-19 infections. Its use is recommended only when Paxlovid and Remdesivir are not available.

Monoclonal antibody infusion therapy is meant for patients 12 and older at high risk for severe COVID-19. Call your doctor if you’ve tested positive (or believe you’ve been exposed) and believe you meet the criteria. 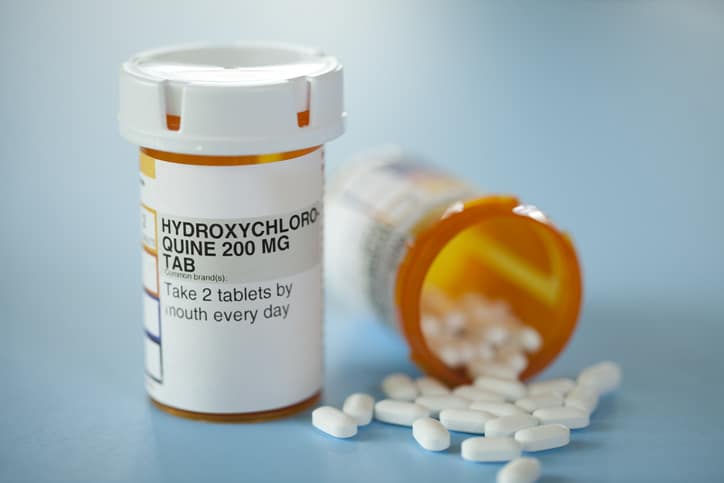 There are a host of drugs used to treat other illnesses, such as Malaria, Ebola, and HIV, that are currently being tested to help fight the virus.

Another medication, the anti-malaria drug Chloroquine, made headlines in March 2020 when then-President Donald Trump called it a “game changer” and later said he was taking it himself.

The following June, however, the Food and Drug Administration revoked its emergency use authorization after a clinical trial found that Chloroquine and Hydroxychloroquine offered no benefit to patients hospitalized with COVID-19. 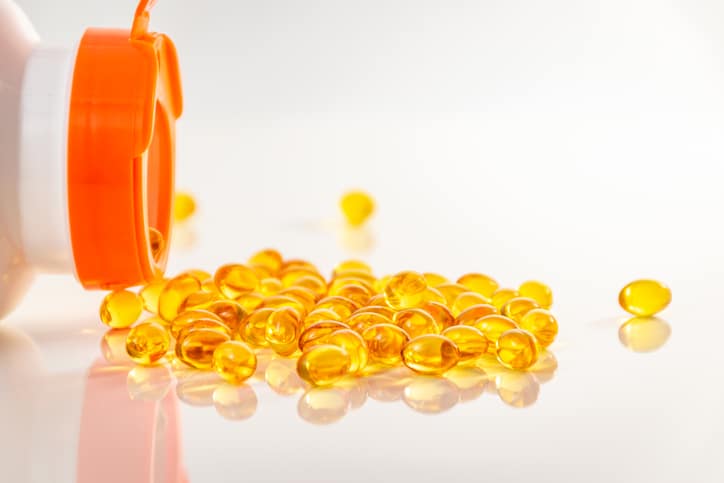 There are also reports that large doses of Vitamin C have been administered by doctors in China — where the virus originated — and in hard-hit New York state.

“Vitamin C won’t hurt, but it may help,” Albrecht says. “For every scientific study showing a benefit, there is another study showing no benefit.”

There have also been studies suggesting that a Vitamin D deficiency plays a role in who catches COVID-19 and how severe their infection becomes.

Health experts point out that the most vulnerable populations — the elderly and patients with chronic underlying conditions — tend to also suffer from Vitamin D deficiency.

There could be a connection, but like so many other discoveries about this disease, the verdict is still out.

How Delta is different, from symptoms to who’s catching it.

When surgery is the right solution for back pain
These folk remedies have stood the test of time
Ready for vacation? Don’t forget your travel medicine
Should you try intermittent fasting?