Shock still blurs the details of the night last September when Shawn Adams was bitten on the forehead by a cottonmouth snake in southwest Dallas.

Perhaps just as surprising, the college student didn’t panic when the pit viper, also known as a water moccasin, attacked from its perch atop a retaining wall.

“I just remember being kind of at peace about it,” Shawn recalls, “because the first thing that I remember thinking is, ‘Did I just get bit by a snake?’”

Shortly after the snake sank its fangs into his face, the 18-year-old from Flower Mound also remembers seeking help from a couple of passers-by, and they immediately called 911.

Paramedics rushed him to Methodist Dallas Medical Center within an hour of the bite. Once there, Shawn was quickly treated with antivenom by Ashley Chapel, MD, MPH, internal medicine physician on the hospital’s medical staff.

“He was actually remaining very calm,” Dr. Chapel says. “But the amount of swelling to the face was really remarkable.”

By then, it was so bad that Shawn couldn’t open his eyes, so Dr. Chapel administered drugs to counter the swelling. Her top concern was keeping his airway open and unobstructed.

She was also wary of the location of the bite and its proximity to Shawn’s vital organs.

Pit vipers use venom to immobilize their prey, so it contains toxins that disrupt brain, heart, and lung functions, Dr. Chapel explains. Even if you’re bitten by a snake that isn’t venomous, she adds, it’s still important to seek medical help to prevent painful and potentially dangerous bacterial infections.

Hospitals in the U.S. carry a general antivenom drug for pit vipers, and it’s most effective when given within four hours of the attack.

“Antivenom is basically made of antibodies or cells that bind to the venom itself to keep that venom from attaching to your tissues,” she says. “The way that it binds to the venom can cause reactions in the patient as well, so you still want to monitor them very closely — their breathing, how their heart is functioning, and making sure the kidneys are still functioning well.” 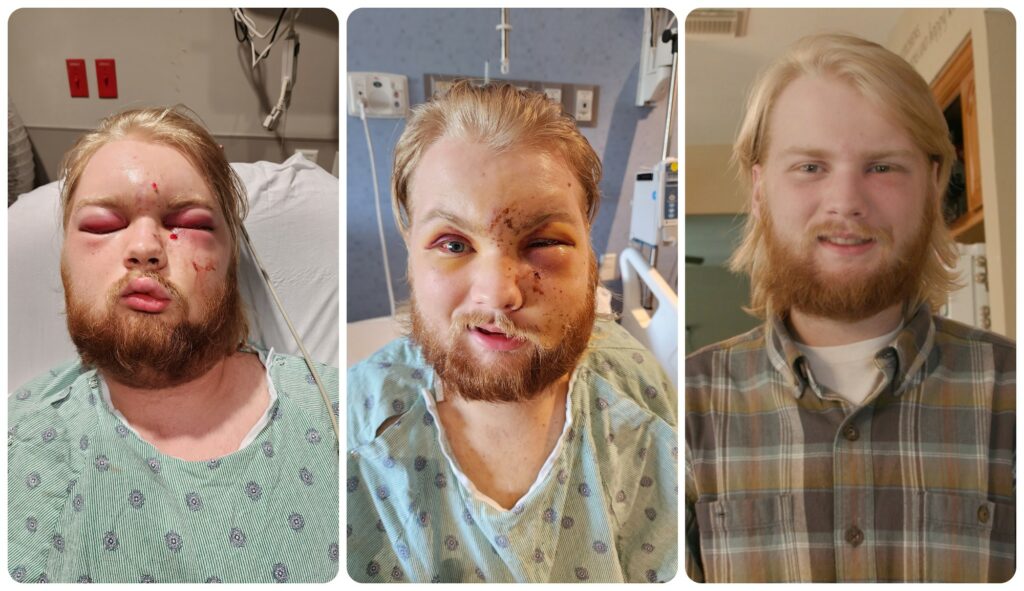 Shawn stayed three nights at the hospital, much of it with his mother, Cindy, by his side. She says seeing him that first night was a shock.

“I walked in and was not prepared for what I saw,” she says. But gradually, the swelling dissipated, and it wasn’t long before the two were joking in disbelief over the incident.

Shawn left Methodist Dallas with antibiotics to prevent infections and medicine to help with the pain. He credits the hospital’s medical team for saving him from a worse fate.

“I loved the whole team at Methodist Dallas. The ED was super responsive. They were thinking ahead,” he says. “We had amazing nurses who took super great care of me. We had some great medical staff.”

Now Shawn is back to doing the things he loves: spending time with family and hanging out with friends, who now have a tough time topping his go-to party story.

“The snake bite story wins all the icebreakers,” he says. “It’s the most blessed, unlucky experience I’ve ever had.”

5 things you need to know after a heart attack
Quick picks for a healthy breakfast
Don’t be afraid to download a fitness class app
Face masks are now a COVID-19 must, so make yours count