Mor Xiong is reminded daily of all that she overcame during her pregnancy to have her son, Theodore.

From fertility issues to frequent stays at Methodist Mansfield Medical Center and, finally, a breech birth, nothing came easy for the first-time mother.

That’s how Mor’s baby boy earned his English name, which means God’s gift, as well as his Hmong name, which honors his family’s Southeast Asian heritage.

“Koob Hmoov means ‘divine blessing,” she says. “It was very important for me to have that reminder.”

These days, Mor spends her hours tending to Theodore, learning more about his eating habits, sleeping schedule, and personality every day. It’s a stark contrast to life before.

The struggle with fertility came as a surprise. Growing up with seven brothers and sisters, Mor thought she and her husband, Cualeng, would raise a family of similar size.

“But we realized we needed help,” Mor says.

Couples might have trouble conceiving for a number of different reasons. The issue might stem from advanced age, chronic conditions, or the prospective father’s reproductive health. And sometimes, there’s no good explanation at all.

In Mor’s case, doctors found she wasn’t ovulating properly, so she and Cualeng decided to try IVF to bolster their chances of starting a family. The first two attempts ended in miscarriages, but their hope flared in the summer of 2019 when Mor became pregnant with Theodore.

“I remember at the beginning, my husband and I said we were going to take it week by week because of our previous losses,” she recalls.

It’s characterized by a weak cervix in a woman’s reproductive system. Normally, the cervix is firm and closed until late in the pregnancy when it gradually shortens and opens to allow for the baby’s birth. The condition can cause the cervix to open too early and result in a miscarriage.

“Cervical incompetence is not something you would even know you have until you get pregnant,” Dr. Hernandez says. “It takes extra screening to identify, and it’s not something a person can control.”

Dr. Hernandez placed a specialized stitch, known as a cerclage, around Mor’s cervix to provide extra support and prolong her pregnancy to a full 37 weeks.

But there were other challenges at work. Mor was prone to bouts of bleeding, which her doctors traced to a polyp, or abnormal growth, in her cervix. She also developed gestational diabetes, a condition that affects 2% to 10% of pregnant women in the U.S. each year, according to the Centers for Disease Control and Prevention (CDC).

Because of these risks, Mor had frequent stays at the hospital and spent her days on bedrest. 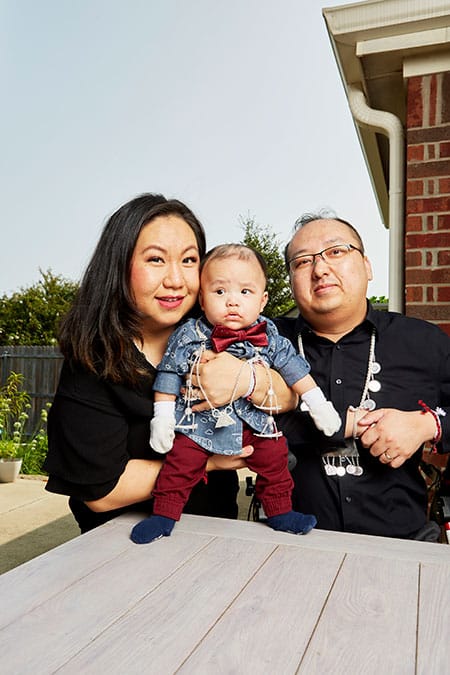 Mor and Cualeng were elated to bring Theodore home.

Near the end of her pregnancy, Mor was allowed to go home. But hardly a week later, she returned to the hospital with Theodore unexpectedly on his way. A cesarean section was necessary because Theodore was breech, with his feet positioned downward instead of his head.

“The nurses and doctors were very reassuring,” says Mor, remembering the surgery. “It also helped that I recognized their faces. In my case, I was there for so long I met everyone. I trusted them.”

Mor also took great comfort in having Cualeng in the operating room with her. Together, the couple welcomed Theodore on March 22.

Although the operation went well, doctors wanted to monitor Theodore for some breathing issues.

Respiratory distress is not unusual in preterm births and cases where mothers develop gestational diabetes, Dr. Hernandez says. The doctors placed Theodore in the neonatal intensive care unit (NICU), where he stayed for a couple of weeks, while Mor had to self-quarantine at home due to concerns over COVID-19 exposure.

Fortunately, Methodist Mansfield’s AngelEye Camera System came to the rescue, allowing Mor to watch over Theodore remotely using an app. She was even able to send her extended family a link to the camera feed.

“Theodore’s the first grandbaby for my husband’s parents,” Mor says. “They loved it. They were watching him all the time.”

She and Cualeng were elated the day Theodore finally came home. It’s a gift to be able to spend time with him, she says.