Beverly Grindele is a peppy, proud grandma who likes to stay active. You might see the 72-year-old at an exercise class, at the international terminal of DFW International Airport headed on a family trip, or gardening in her yard. What you won’t see her doing is letting unexpected surgery slow her down.

Beverly was all set for a trip to Australia to visit her oldest granddaughter when persistent back and neck pain started interfering with her plans. She put her weekly Jazzercise on hold, stopped gardening, and followed her doctor’s advice to get an MRI. It showed a pinched nerve, which explained her back pain. It also showed something no one expected — a golf-ball-sized mass on Beverly’s thyroid.

The thyroid is a gland at the base of your throat. Its function is to regulate your energy levels and control other hormones necessary for metabolism.

Beverly was concerned, so she turned to Mark Bailey, MD, general surgeon on the medical staff at Methodist Richardson Medical Center, for help. “When a mass is that large, there’s always the possibility it could be cancerous,” Dr. Bailey says. “Some doctors use 4 centimeters as the minimum threshold for removal, but I recommend surgery to my patients any time there is a mass larger than 3 centimeters.” He says the bigger the tumor, the bigger the risk for complications. 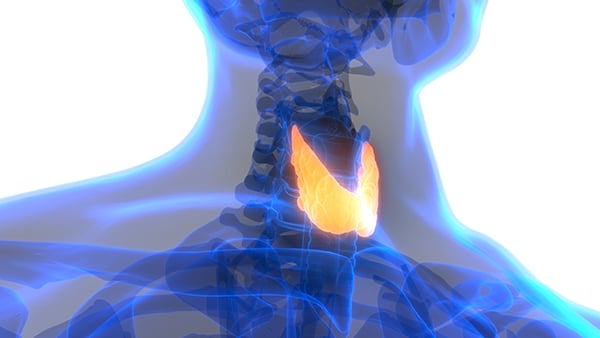 The thyroid gland is at the base of your throat, just above the collarbone. However, the golf ball-sized lump on Beverly’s thyroid went undetected because it was hiding behind her collarbone.

The location of Beverly’s mass made things even more complicated. It was hiding under her collarbone, which is why she never saw or felt it. Beverly also learned that her low-intensity coughing, difficulty swallowing, and occasional choking were all caused by the mass.

Beverly also hid her diagnosis from her family. “Telling my grandkids about the surgery was hard,” she says, tearing up. “I wasn’t worried at all, but my son survived throat cancer a few years ago, and that was a tough journey for us all. I wanted to be sure they knew this wasn’t like what their Daddy had.”

So, she waited to tell them. Dr. Bailey cleared Beverly for travel, and just like that, her Australia trip was back on. 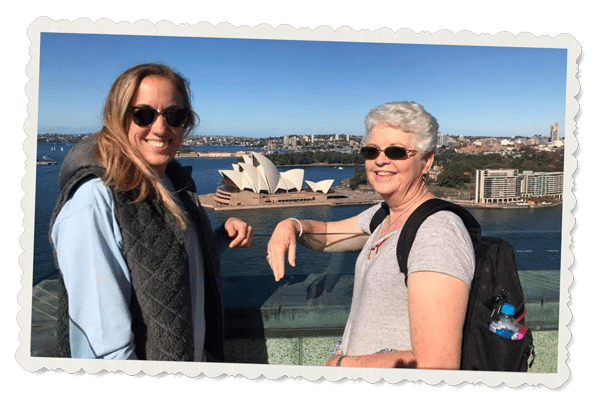 Beverly Grindele and her granddaughter, Amanda, pose in front of the Sydney Opera House during their trip to Australia.

When Beverly returned home, it was time to face the surgery. She put her trust in Dr. Bailey and the Methodist Richardson staff.

“Thyroid surgery is very technically demanding. Removing masses like these means working around the voice box and windpipe to reduce the likelihood of affecting the voice.

Since the incision site is in the front of the throat, we also need to minimize scarring,” Dr. Bailey explains.

The surgery was a success. Dr. Bailey was able to isolate the mass and remove it. The outpatient surgery had her sleeping soundly in her own bed that night.

Without any symptoms, Beverly was back to her favorite hobbies two weeks later. “Dr. Bailey said, ‘If you feel like going and it doesn’t hurt, go to Jazzercise,’ so that’s what I did,” she says.

Beverly hasn’t looked back. “I’m so grateful they found it when they did. I don’t even think about it now,” she says. Routine pathology reports confirmed the lesion was benign, so Beverly is now cleared for as much Jazzercise, gardening, and travel as she can handle.

Exercise is important to Beverly Grindele. Learn more about classes offered at the gym—and pick your next favorite!