As they witnessed people hiking down a rugged mountainside, carrying sick and elderly loved ones to desperately needed medical help, three Methodist Health System colleagues and friends knew they had come to the right place.

Powerful, life-changing moments like these are cherished by Scott Layman, RPh; Julian “Hoyt” Slade, PharmD, BCOP, CMTM; and Amber Smith, RN, who for the last several years, have served on a medical mission trip called Heart for Honduras.

These missions, organized twice a year by Salem Lutheran Church, just north of Houston, provide free medical outreach in and around Tela, Honduras, one of the poorest countries in the Western Hemisphere. Each mission group is made up of three teams: dental, medical, and vision. Because of the widespread poverty, the Heart for Honduras teams see very large crowds, sometimes more than a thousand people in a single day.

In February, Layman, a pharmacist, made his 15th trip to Honduras. He was joined by two Methodist colleagues, also veteran Heart for Honduras team members: Slade, pharmacy clinical manager at Methodist Mansfield Medical Center, and his wife, Smith, critical care nurse at the hospital. Working alongside 17 other missionaries, they saw more than 5,000 people during their five-day clinic. 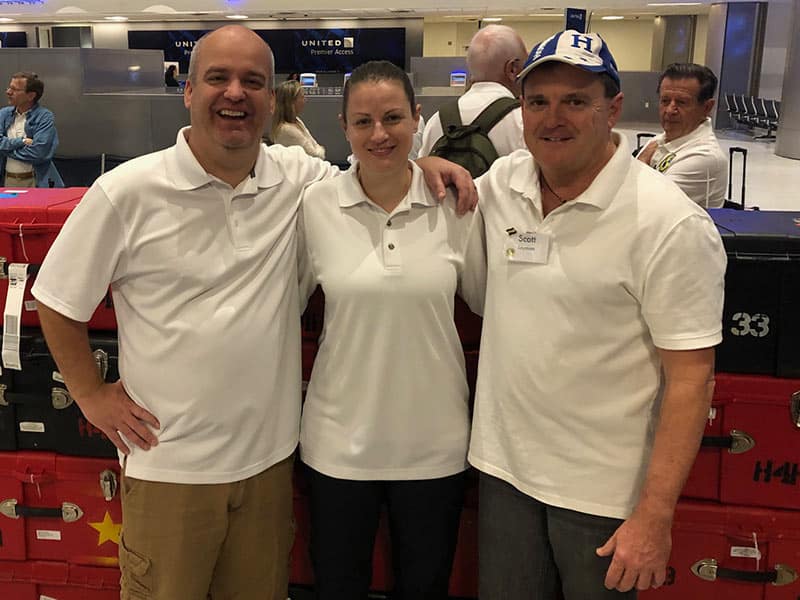 Before departing George Bush Intercontinental Airport in Houston, (from left) Hoyt Slade, Amber Smith, and Scott Layman check in foot lockers loaded with medications and supplies for their Heart for Honduras trip in February. All team members wear white when traveling.

Waiting all year for healthcare

“My role on these trips is usually as lead pharmacist for the medical team,” Layman says. “The single most challenging part of what Hoyt and I do is trying to navigate all the prescriptions written in Spanish. We bring about 50 to 60 medications with us from the States, but we still have to translate the original prescription and then find a way to correctly counsel our patients. It is no exaggeration to say that we are very grateful for the local bilingual high school students who act as translators.”

The mission team drives to remote communities and sets up the day’s clinic in a schoolhouse. Before the doors even open in the morning, there are already several hundred people in line, as many have been waiting all year for the clinic to come to their area.

“We see a lot of respiratory problems,” Slade says. “This is in part due to a lack of electricity, which forces people to build fires for cooking and heating inside their makeshift homes, which further contributes to the abundant air pollution. Diabetes is a big problem, as well, since there is a regional pastime of chewing on sugarcane, one of Honduras’ largest crops.”

In their makeshift, schoolroom pharmacy, Layman, Slade, and Smith spend 10-plus hours each day filling prescriptions for breathing treatments (nebulizers), antimicrobial medicines to combat the effects of poor-quality drinking water, an array of diabetes medications, and others to address the many ailments that persist in these poverty-stricken towns. 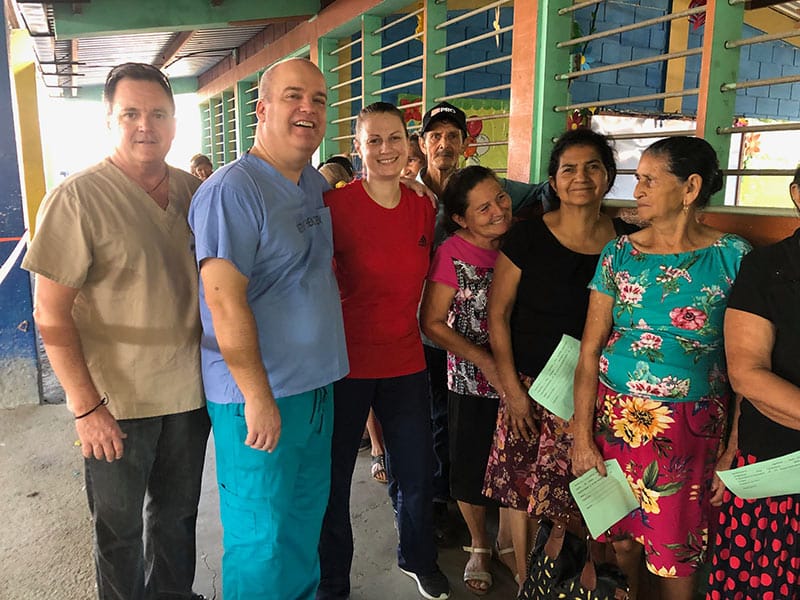 Scott Layman, Hoyt Slade, and Amber Smith visit with patients in line to get their recetas médicas, or prescriptions, filled during a mission clinic in February.

Methodist not only supports its employees going on medical missions trips; it also helps make their trips successful. For this one, the health system supplied a large number of wound care supplies, which are always greatly needed.

“When I began going to Honduras three years ago, it became clear to me that there was an intense need for wound care during our clinics,” Smith says. “The Honduran people I meet have never even seen some of the most basic wound care supplies that we in America most likely take for granted. It’s very moving to teach people how to take better care of their wounds by simply sharing my knowledge.”

In addition to the donated supplies, a cardiologist on the Methodist Mansfield medical staff provided a much-needed heart medication that was unavailable in Honduras. The medication was for the children’s pastor of the Heart for Honduras program.

It’s an honor to serve such grateful patients

The Methodist trio says the Honduran people are so grateful. It’s hard for them to believe that Americans would use their vacation time, spend their own money, and work so hard to bring desperately needed care to people they don’t know.

“I just tell them it’s how we show God’s love,” Layman says.

For Smith, the mission trip is actually a reprieve of sorts. “Here in the United States and other First World countries, caregiving can be more complicated due to the amount of paperwork and processes we have in place,” she says. “But on these trips so much of that is stripped away, and I get to just be a nurse taking care of patients.”

Layman adds that it is an honor to have the opportunity to serve in Honduras.

“Honduras and its people hold a special place in our hearts,” he says. “Everyone I talk to at Methodist about our trips is eager to hear more, and many want to help or come with us on future trips.”

Methodist Health System’s mission is to improve and save lives through compassionate, quality healthcare. You can lend your support or learn more about Heart for Honduras.

Methodist Health System’s mission is to improve and save lives through compassionate, quality healthcare. Our Mission to Medicine series  shares the inspirational stories of clinicians extending this mission beyond hospital walls to local, national, and international communities.

Your guide to working from home
Pandemic transforms the ICU and inspires a new unit
Robotic surgery offers a speedy recovery from hysterectomy
Should you try intermittent fasting?