Just as Susan Rogers went to investigate sirens outside her Arlington home one night in January, she suffered a major stroke — and the next 911 call was for her own emergency.

“Instantly I could tell something was very wrong,” Susan says. “My face felt strange, my speech was slurred and I couldn’t move the right side of my body.”

The 69-year-old knew right away what was happening because her husband has heart disease and she had done her homework. She was well aware they needed to think FAST:

“I told my husband, Jerry, to call 911 because I was certain it was a stroke,” she says.

Ketan Trivedi, MD, emergency medicine physician on the medical staff at Methodist Mansfield, was working in the ER when the call came that a suspected stroke patient was en route.

By immediately activating the “code stroke alert,” Dr. Trivedi summoned his team so they would be ready to diagnose the problem and treat Susan the minute she arrived.

“Because every minute counts in treating a stroke,” Dr. Trivedi says, “patients like Susan are triaged differently and take priority over other non-urgent cases.”

Within 25 minutes of arriving, Susan was assessed by the stroke team, had lab work done, and underwent a CT scan to rule out any brain bleeding. 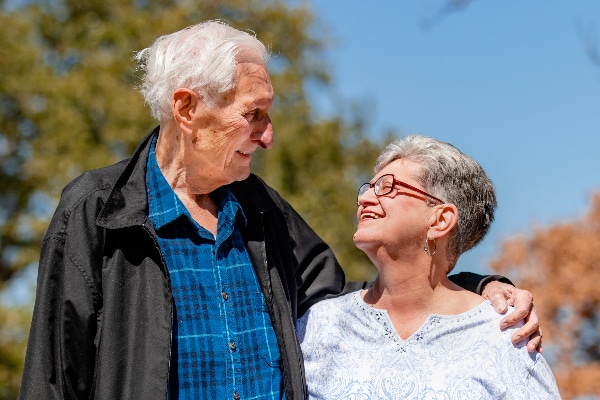 Dr. Trivedi then consulted with the on-call neurologist, Shaharm Khalid, MD, a board-certified specialist on the medical staff at Methodist Mansfield.

“Our stroke evaluation protocols confirmed that an artery to Susan’s brain had become blocked, and she was having what we call a moderately severe ischemic stroke,” Dr. Khalid says.

In a flash, the team administered a clot-dissolving medication — known as a tissue plasminogen activator (tPA) — to clear the blockage. Dr. Khalid describes the IV-administered drug as the “gold standard” in treating such strokes.

Over the next 24 hours, Susan recovered in the hospital’s intensive-care unit, where the team closely monitored her for any additional strokes.

Susan continued her recovery for the following six days before being transferred from Methodist Mansfield to a nearby in-patient rehabilitation facility. Two weeks later, she was back home and getting stronger by the day.

Now almost fully recovered, she has put the ordeal behind her and feels fortunate to be a stroke survivor. She’s grateful to her healthcare team, to her husband, and even to her own awareness for being able to recognize her symptoms.

“I educated myself about stroke symptoms and knew that’s what was happening to me,” Susan says.

Drs. Trivedi and Khalid agree that Susan’s awareness and her husband Jerry’s quick 911 call were critical. As was the decision to quickly get her to Methodist Mansfield, where all the critical elements were in place to provide advanced stroke care.

“There is no doubt in my mind that God was watching over me that day,” Susan says.

Would you know a stroke if you saw it?

Midlothian hospital wows patient who 'grew up in ERs'
First-time mother raves about ‘stress-free’ delivery
Paws for stress relief: How pets can help your health
Pilot survives blood clot he mistook for COVID-19