But the thing that broke Jennifer, that literally brought her to her knees and to the doors of multiple area hospitals, was a debilitating spine condition affecting as few as 1 in 100,000 people a year.

“When you’re in pain, you’re in this dark room and asking why,” Jennifer says. “I remember crying and begging for help.”

Pushed to her limits

The backaches started the first week of January 2019. Jennifer assumed she’d just overdone the holiday season, but soon she could barely walk. At times, she was crumbled on the floor.

“The pain had taken over, and it was horrible,” she says. She had been to three chiropractors and a neurosurgeon, as well as a hospital emergency room (ER). Everyone blamed her sciatic nerve for the pain, but no amount of physical therapy or medication brought relief.

Then Saturday, March 23, Jennifer sneezed — and things went from bad to worse.

“It was a jerking kind of sneeze,” Jennifer recalls. “I couldn’t move, I couldn’t breathe.

“Then all of a sudden, I went numb from my hips down. I couldn’t feel anything.”

Joe took Jennifer to yet another hospital, where she waited almost five hours in the waiting room only to hear once again that her sciatic nerve was the problem.

By midweek, she could no longer control her bowel movements or urine. Finally, on Thursday, she turned to her primary care provider, who insisted she go immediately to the ER at Methodist Dallas Medical Center.

Jennifer braced herself for the same diagnosis, but instead, Brad Sellers, DO, medical director of the emergency department, suspected something else.

“Are you aware of cauda equina syndrome?” he asked Jennifer.  Her symptoms were telltale for the rare condition — one he’d only seen once before in his career.

Cauda equina, literally “horse’s tail,” is the shape of the nerve roots in the lower part of the spine. Cauda equina syndrome occurs when these particular nerve roots become compressed. Left untreated, it can lead to paralysis. Jennifer needed emergency surgery.

Despite the shocking diagnosis, Jennifer was flooded with relief.

“For the first time in all of this, I had hope,” she says. “I love this hospital because they were on it.”

Jennifer’s scan shows the shape of the nerve roots in the lower part of her spine, which led to a diagnosis of cauda equina, literally “horse’s tail.”

Relieving pressure on the spine

The narrowed spinal canal in cauda equina syndrome can be caused by several factors. In Jennifer’s case, it was a herniated, or bulging, disk. With the ligaments containing the disk weakened from normal wear and tear, all it took was that sneeze to push the disk into the spinal canal and compress horse-tail-shaped nerves.

Like Dr. Sellers, in his 20 years on the medical staff at Methodist Dallas, neurosurgeon Bala Giri, MD, had also only seen cauda equina syndrome once, but he knew it was nothing to take lightly.

“For a typical adult, a healthy spinal canal is 15 to 25 millimeters,” Dr. Giri says. “For Jennifer, it was down to less than 3 millimeters. That’s all the room she had for all the nerves controlling her legs, bowel movements, and bladder function. If her nerves were compressed any more, she would have been paralyzed.”

When Jennifer saw Dr. Giri following her surgery, she couldn’t hold back the tears. “You’re my miracle,” she told him. 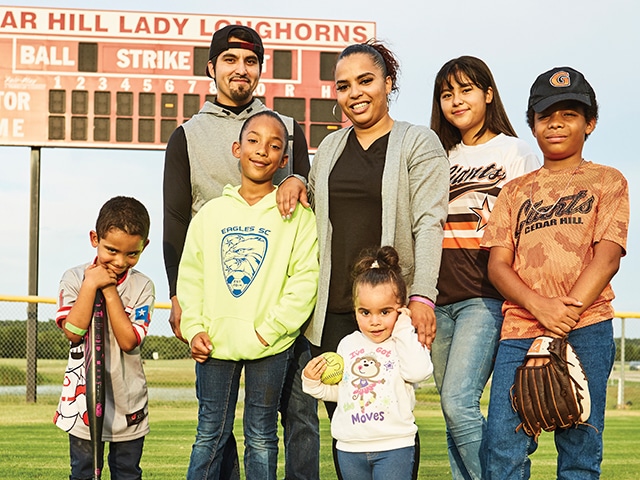 Jennifer Diosdado with her husband and five kids.

Jennifer began physical therapy in the hospital and continued over the next few months to strengthen her core muscles and decrease her risk for another herniated disk. By midsummer, she was back at work, attending baseball games, and planning Girl Scout activities.

“I resumed my life little by little, and now I’m back in there,” she says. She was even able to walk some light trails with her husband on a trip to Colorado.

The credit for her restored freedom goes to Methodist Dallas.

“I have hospitals closer to me, but I prefer to go there,” she says. “They treated me like family and refused to give up on me. They’re amazing.”

Subscribe to Shine Online for the latest in health news and tips.

Threat of sepsis lurks in any infection
Carbs are not the enemy
Achy back after a bike ride? Advice from a neurosurgeon
Picking up the pieces after car crash nearly killed him