Catherine Bridges, for one, had reached her limit.

The wife, mother, and principal of high-performing Florence Hill Elementary School in Grand Prairie was exhausted by irregular, painful cycles that just kept getting worse.

She went to see her longtime gynecologist, who performed an ultrasound that revealed Catherine had uterine fibroids. These noncancerous growths can cause prolonged periods, pelvic and back pain, and heavy menstrual bleeding.

“There is an emotional and physical toll that these heavy menses have, made worse by the frustration of having to deal with it,” says Erin C. Westerholm, DO, OB/GYN on the medical staff at Methodist Mansfield Medical Center.

The physician laid out her patient’s options: waiting it out until menopause, when the fibroids would likely shrink; hormone or birth control medication; endometrial ablation, which cauterizes the uterine lining; or a hysterectomy.

At 41, Catherine didn’t want to “wait it out” or take hormones. She considered ablation, but that wouldn’t solve her problem if she had adenomyosis, a condition in which the uterine lining grows into the muscle, causing it to contract frequently and bleed.

Adenomyosis can be definitively diagnosed only by examining the uterus after it has been removed.

Catherine was decisive. “I’m done having babies, so take it out,” she recalls saying.

The robot enables Dr. Westerholm to work with tiny instruments that she controls with a console. It translates her hand movements into minimally invasive surgery. The system also affords an unparalleled close-up, magnified 3D view of the organs. 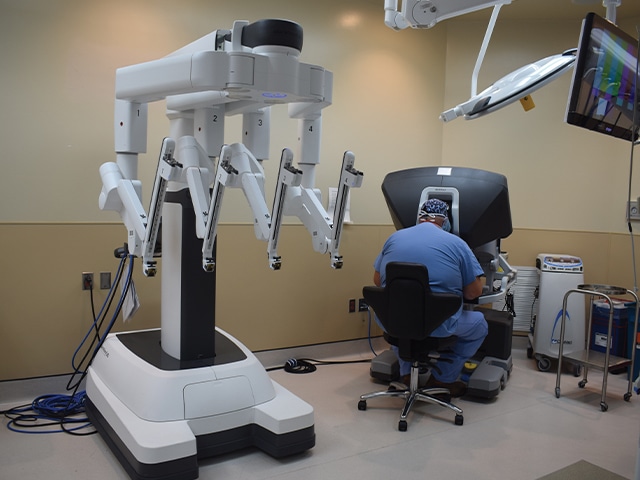 Catherine trusted the physician’s choice, and she’s glad she did.

“I have friends who have had hysterectomies, and they told me it would take a year to recover,” Catherine says. “It took me a month and a half or two months, and I’m so much better. I have more energy, and I don’t want to sleep all the time.”

Making a small cut in the navel and two on either side that left tiny scars, Dr. Westerholm removed the uterus. She also excised the fallopian tubes, which is recommended because it decreases the lifetime risk of ovarian cancer.

“With traditional surgery, it is more of a challenge to get all of the tubes,” Dr. Westerholm explains. “The robotic visualization is far superior.”

BACK ON HER FEET IN NO TIME

The recovery time after robot-assisted surgery is also much faster and easier than with traditional surgery, the doctor points out.

“I have patients who go home the next day and can even go back to work in a short period of time, so it’s a huge difference from major abdominal surgery,” Dr. Westerholm notes. “They can do anything they want after six weeks.”

Catherine has a history with Methodist Mansfield, where she has gone for childbirth and emergency asthma relief.

“They have just been phenomenal,” she says. “They are always kind and caring, and you can tell they enjoy what they do.”

Catherine remembers how the facilities and every interaction put her at ease.

“The nurses and anesthesiologists do their best to make you feel comfortable even though you have just met them,” she says. “It’s a more personable experience.”

Is a hysterectomy right for you?

4 truths you need to know about breast cancer
Weight-loss surgery hits all the right notes for piano teacher
VIDEO: Patient finds relief from GERD
5 ways to cope with COVID-19 stress like a healthcare hero