Jeff Willoughby started riding a dirt bike at age 5. Speeding around a track and getting airborne doesn’t faze the 45-year-old father, who lives in Venus, Texas, and works as a project manager for a commercial construction company.

In his 40 years of motocross, he had been relatively lucky in the injury department, suffering only a few broken ribs. But his luck ran out on Nov. 10, 2018, during some recreational riding at the TexPlex Park in Midlothian.

“I hit a jump at about 20 mph, and the bike bucked me into the air when the foot pegs got stuck in the dirt from the rutted face of a jump,” Jeff recalls. “I landed on my head in soft sand with the bike crashing down on top of my shoulder.”

Fortunately, Jeff was wearing a helmet. Spectators rushed to his side to help, but he was able to crawl to the side of the arena on his own, catch his breath, and load his bike on his truck. He then called his wife, Mary.

“I told her I needed her to take me to the hospital,” he says. “Ten minutes later, when I got home, the shock was starting to wear off and the pain was setting in. I realized I was really hurt.” 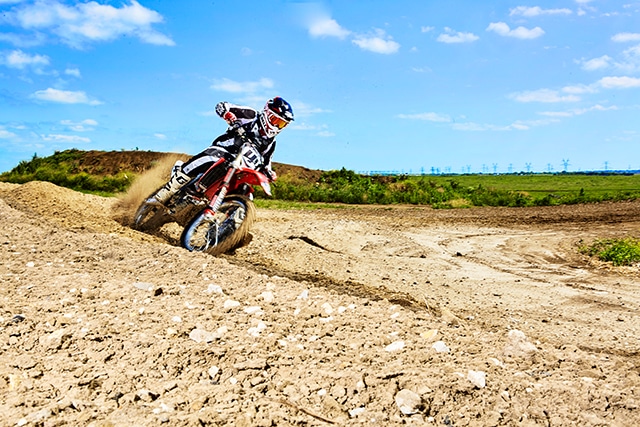 Jeff Willoughby is ready to ride again after a crash sent him to Methodist Mansfield for treatment.

“We did imaging and labs and determined he didn’t have bleeding in his stomach, but he did have multiple rib fractures and a broken clavicle,” Dr. Trivedi says. “As a Level III Advanced Trauma Facility, we’re able to facilitate timely and coordinated care for patients like Jeff. We have quick access to trauma surgeons, should they be needed.”

Fortunately, Jeff didn’t require emergency surgery, but he would need outpatient surgery to repair his clavicle. 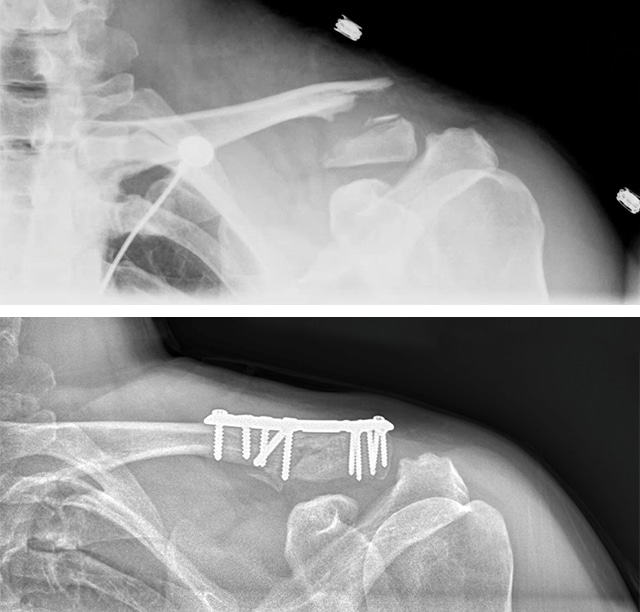 Jeff’s X-rays before and after surgery.  The first one shows the break in the collarbone, the second image shows the titanium plate and 10 screws used to repair the fracture.

Back on the bike

Five days after injuring himself, Jeff had a procedure to repair a distal clavicle fracture. This is a break in the outer third of the collarbone near where it attaches to the shoulder blade.

“Distal fractures are complicated,” explains John R. Harris, MD, orthopedic surgeon on the Methodist Mansfield medical staff. “When determining the type of plate to use to repair the fracture, you need to consider the patient’s age, his activity level, and how strong it needs to be to prevent future injury.”

Knowing the daredevil would want to get back to his adventurous lifestyle, Dr. Harris chose to use a titanium plate and 10 screws to repair Jeff’s fracture. The surgery took about one hour, and Jeff had to wear a shoulder sling for six weeks.

“I was back to work in a week and a half,” Jeff says. “The trauma treatment at Methodist Mansfield was great.”

Today, Jeff, Mary, and their 5-year-old daughter, Avery, are enjoying the active lifestyle they had prior to Jeff’s injury. They took a family snow-skiing vacation to Colorado in the spring and regularly go for family bike rides — though not the motocross kind.

How a heart attack can strike 'out of the blue'
Is it safe to take sleeping pills every night?
West Texas rancher finds hope in Dallas with new prostate cancer drug
When a cough is more than a cough