Before the pandemic, the hospital police charged with protecting Methodist Health System were every bit as vigilant as they are today.

But now, the crisis that was once a training drill is a daily routine.

Even before the virus hit home in March, Methodist Health System leaders were busy setting up the Emerging Infectious Disease Task Force, a group of administrators and frontline health providers who have taken the lead in pandemic response.

At the helm is Wes Dunham, the system’s director of emergency management, who has pioneered crisis planning for the system and seamlessly led Methodist from training for an imaginary disease in past years to the real thing this year.

“A blessing of this year is we’ve acquainted a lot of people with the field of emergency management,” Dunham says. “We’re in the middle of a drill that doesn’t stop.”

Dunham arrived at Methodist in 2003, before such a program had been established and before the field of emergency management had taken off in the healthcare industry.

“I really liked this idea of helping the helpers,” Dunham says.

In the two decades since, Dunham has built the operation from the ground floor, with plenty of buy-in from leadership — and no shortage of helpers.

Among those partners is Methodist Police Chief Dustin Munn, who says Dunham embodies the calm, conscientious demeanor so critical to disaster mitigation and contingency planning. He’s just the type of leader an organization needs, for example, when a pandemic strikes.

“It’s a voice of reason that’s respected at every level of the organization,” the chief says. “He plays a multifaceted role but doesn’t seek the spotlight at all.” 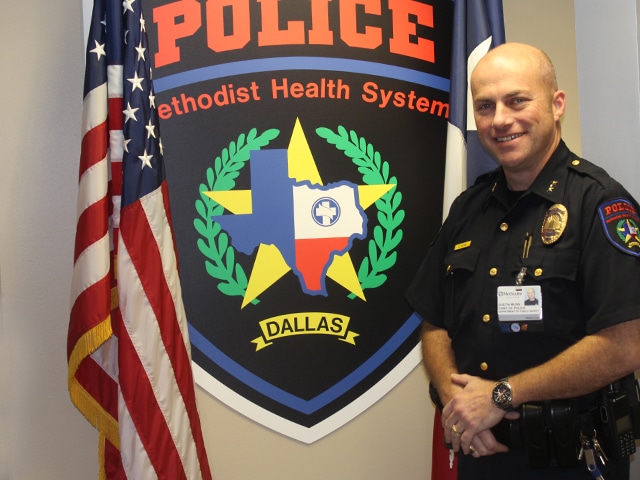 For the 50 officers who make up Methodist’s Department of Public Safety, keeping the peace makes the health system’s daily operations possible.

“My goal is to provide the most consciously competent group of police officers that I can for the system,” says Chief Munn, the chief at Methodist since 2017 and a career lawman who spent 15 years with the DeSoto police before that. “My due diligence means protecting Methodist Health System, our officers, our staff, and our patients. Doing the minimum does not cut it.”

During the pandemic, security across the system has gotten even tighter. Entrances have been locked down, and visitors have been limited. Surveillance cameras dot the campuses and an ever-vigilant staff always has a panic button or public “blue light box” close at hand, should they ever need to call the police.

And while Munn’s department is always prepared for a routine confrontation, officers also stand ready if the unthinkable happens.

“Our Shepherd program puts every unit through active-shooter education,” Chief Munn says. “Because these things have the potential to happen anywhere at any time.”

The program distributes active shooter response kits to a “safety captain” in each unit so that Methodist police have well-trained civilian partners stationed throughout the hospital to respond and summon help if the need arises.

“It’s a kind of community-based policing,” Methodist police Lt. Joseph Cherry says. “We get the staff involved, and they communicate with us. We need that force multiplier.”

Dunham says Munn, Assistant Chief Teddy May, and the rest of the department are dedicated to keeping Methodist hospitals safe and encouraging every member of the staff to pitch in.

“These guys are sacrificing a great deal to do what they do,” he says. “They want to educate people that they’re partners in the security of this place — that heightened vigilance that we all have.”

It’s that devotion to “going above and beyond” that drives Dunham, Munn, and the staff as a whole, especially when the stakes are at their highest.

“When things get scary, our patients and community can take comfort in knowing there’s always someone on the frontlines or behind the scenes making sure we get through it,” Dunham says. “That’s what makes our hospitals so special.”