Try to name an extremity more important to our quality of life than a healthy pair of hands. Odds are you’re using them right now to type, swipe, or scroll and not thinking twice about it — unless you are among the 12 million Americans with carpal tunnel syndrome.

“This is a complete game-changer for so many people who put off traditional carpal tunnel surgery,” says Shaun Garff, DO, sports medicine specialist on the medical staff at Methodist Mansfield Medical Center. “Patients go home almost immediately with little more than a bandage on their wrist.”

“We are able to keep the patient awake and just numb the wrist,” Dr. Garff says.

Dr. Garff is the first physician in Tarrant County to perform the ultrasound-guided release procedure. He’s one of only six doctors in Texas offering this laparoscopic alternative.

Up to 6 percent of adults in the U.S. suffer from carpal tunnel syndrome (CTS), the most common form of entrapment neuropathy, and many won’t seek treatment until the damage is already done.

In years past, patients with CTS — which is caused by a pinched nerve in the wrist — might have worn splints every night to relieve their pain. Others may have resorted to the only sure-fire treatment at the time: surgery to open the wrist and sever the ligament encroaching on the carpal tunnel — a pathway at the base of the wrist through which most of the nerves of the hand must pass.

“I put up with the pain so long because traditional carpal tunnel surgery sounded painful and the recovery time was just too much,” says Thomas Gray, a 73-year-old Cedar Hill man who spent his career typing on a keyboard. “When I heard about this option, I jumped at the chance to try it.” 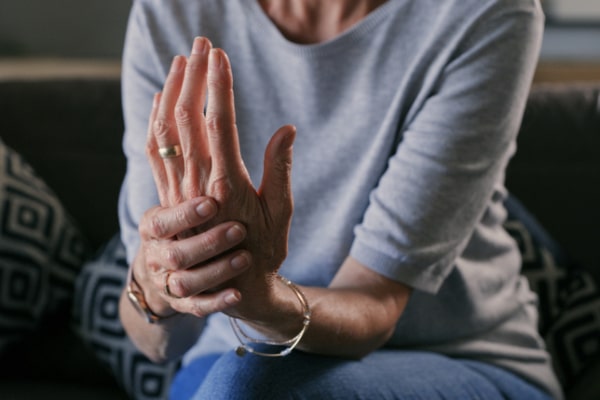 Gray was the first patient to undergo the procedure at Methodist Mansfield. Dr. Garff utilized ultrasound imaging, the same technology used to view babies in the womb, to see inside the patient’s wrist.

“We’re able to see blood vessels and nerves and tendons and tissue,” Dr. Garff says, “and that’s able to guide us in to do what we need to do.”

Using a single incision measuring only a few millimeters, the doctor inserts a “micro knife” outfitted with a tiny balloon that moves other tissue aside to cut the carpal ligament that’s trapping the nerve and relieve pressure inside the wrist.

When the ligament grows back together, it leaves a larger carpal tunnel and more breathing room for the nerve within.

Just six days after undergoing the release procedure, Gray was able to easily twist open a bottle. He’s now excited to have his other wrist done in a few weeks.

Aside from the nearly immediate results, the biggest advantage for Gray was the quick recovery time and short downtime after surgery. It’s why Dr. Garff says the procedure is so appealing to patients who have been living in misery for years.

“It’s really a major advance,” Dr. Garff says, “knowing we can bypass weeks, if not months, of therapy and rehab.”

How to know if you may have carpal tunnel syndrome

Advanced cardiology procedure gives subzero support
Is breakfast really the most important meal?
How COVID-19 stress can literally break your heart
Danger in the sun: Spot the signs of heat stroke