Professor Bob Kaiser is used to working with some of the top physicians from across the country as head of a healthcare master’s degree program at the University of Texas at Dallas.

But it wasn’t until the avid bicyclist was nearly killed by a car that he sought medical help from one of his students.

Bob knew Nimesh Patel, MD, from inside the classroom and quickly learned he was a neurosurgeon on the medical staff at Methodist Dallas Medical Center. Dr. Patel had offered to provide a consultation to Robert’s older brother, who suffered a cerebral hemorrhage in the spring.

That pronouncement became prophetic in May when a casual bike ride with friends quickly turned sideways. The 67-year-old was crossing a busy intersection in Richardson when he plowed into a moving car.

“We were riding down a street named Lookout, of all things,” he says. “I was following one of my friends, and the light changed. The next thing I remember is waking up with a first responder at my side.”

‘WE’LL TAKE CARE OF YOU’

Bob had struck the vehicle so hard, he knocked off a side mirror where he hit his head.

“My chest and my right arm crashed into his car door and put a pretty good-sized dent in it,” he says. “A little faster and I probably would have been run over.”

Bob was rushed to a local emergency room where doctors determined his arm was swollen, but not broken. They also found some minor bleeding in his brain but assured him that injury would heal on its own.

Bob took it easy for a couple of weeks before picking things back up with his running and biking buddies. But pretty soon, he began experiencing double vision and awkward movement in his right leg, which prompted his optometrist to recommend an MRI in late July.

“I was sitting down to dinner with my family on the day of the MRI when the doctor called me back with the scan results,” Bob says. “He told me I needed emergency brain surgery.”

Bob hung up the phone and knew which surgeon he wanted to help him. Around 6 a.m. the next day, he forwarded the scans to Dr. Patel, who is still a student in his class at UT Dallas, and got a call back within a few minutes.

“He said, ‘Have your wife drop you off at Methodist Dallas. We’ll take care of you,’” Bob remembers. 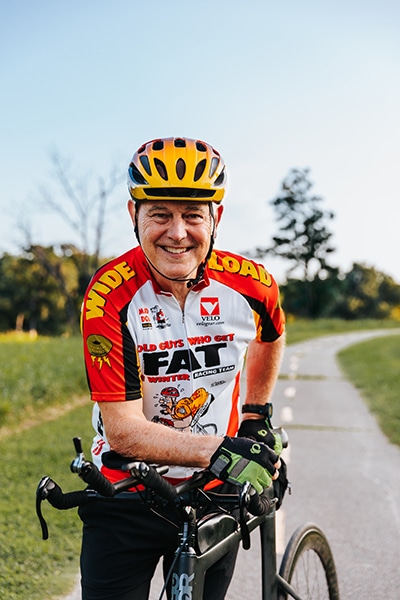 Bob’s passion for cycling rides on after his recovery.

Dr. Patel says he immediately recognized the issue when he saw Bob’s scans.

“It’s called a subdural hematoma, and it’s caused by trauma,” he explains. “A normal MRI would show the two halves of the brain fully expanded against the skull. In his case, he had blood that layered on top of the brain on both sides, and that was putting pressure on it.”

A vein was torn during Bob’s initial accident, Dr. Patel says, and the bleeding only got worse as Bob returned to his active lifestyle. Anti-inflammatory medications that he was taking for aches and pains exacerbated the problem.

If untreated, subdural hematomas are life-threatening, Dr. Patel says. But even as alarm bells were ringing for the neurosurgeon, he calmly directed Bob to the Methodist Dallas emergency room where he greeted his professor-turned-patient and ushered him to surgery.

Dr. Patel performed a craniotomy and drained the excess fluid before closing the skull and sending Bob on his way to recovery.

“They treated me like I was the president of the United States, and the nursing staff was remarkable,” Bob says. “The surgery was on Tuesday, and I was home Thursday afternoon.”

If anyone doubted whether Bob would teach the next class, they needn’t have worried.

Barely out of the operating room, he was already feeling well enough to reassure his students and colleagues in a self-recorded video.

“He was back to teaching our class online that next Monday,” Dr. Patel says.

Bob even took the opportunity to incorporate his story and his star pupil into his lesson plans on business principles.

“There are a lot of things I’ve done for an A,” Dr. Patel jokes. “But this one takes the cake.”

How COVID-19 can cause kidney damage
Soul food can be good for the body and soul
Journalist once covered surgeon who performed her transplant
VIDEO: How hospitals put your safety first amid pandemic