As anyone who suffers from migraines knows, these persistent headaches are no joke. The nausea, dizziness, and sensitivity to light and sound can leave you feeling like you want to crawl to the nearest dark room.

Nearly 20% of women suffer from migraines, along with nearly 10% of men and even 10% of children. In other words, migraines are “very, very common,” says Roberto Nieto, MD, neurologist on the medical staff of Methodist Mansfield Medical Center. “They also run in families; 70% of people with migraines have a family member who also suffers from the disorder.”

Get to know your migraine

“It helps to know your particular triggers,” Dr. Nieto says, which can amount to a host of internal and external stimuli.

Some examples of common triggers include:

“Everyone has different triggers — red wine, aged cheese, or going too long without eating are a few common ones,” Dr. Nieto says. “The scent of perfume is a big trigger for a lot of people.”

In fact, the hormones released before and during a woman’s menstrual cycle can set off migraines for many women. Women who experience hormone-related migraines might need to avoid taking hormonal birth control, as that can also trigger a migraine.

Many patients with migraine headaches also suffer from motion sickness. Motion sickness may be present years before any migraine occurs.

Before a migraine strikes

There are various signs that can point to an upcoming migraine. The first is often a visual disturbance called an aura, which affects about 20% of migraine patients, Dr. Nieto says. An aura could involve black or white dots, flashing lights, or blurred or distorted vision of any kind.

“Migraines begin in the occipital lobe of the brain, which is the part of the brain that processes vision,” Dr. Nieto adds. “It makes sense that it would affect the vision first.”

Other signs include people becoming irritable, hungry, or restless in the hours before the migraine hits. 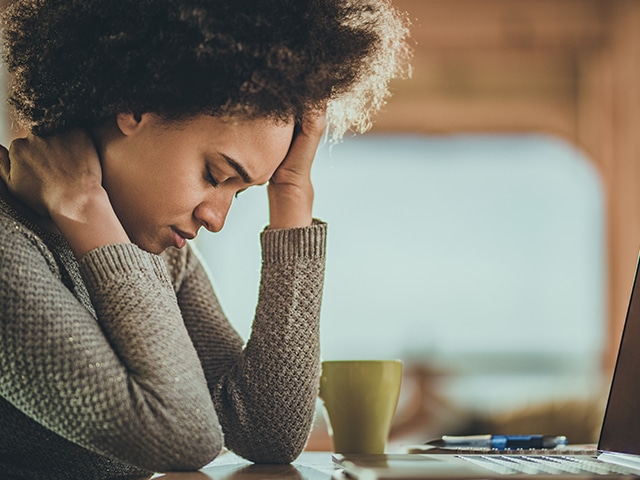 How you can tell it’s a migraine

The disabling nature of migraines is what sets them apart from other types of headaches, Dr. Nieto says.

“The hallmark of a migraine is that it changes a person’s behavior; for example, they have to lie down,” he says. “There is some disability associated with the headache.”

Migraines tend to gravitate to one area of the head, which could be behind the eyes, in the temple areas, on the back of the head, or even in the jaw or face, mimicking a sinus infection.

“People will take sinus medication thinking it’s a sinus problem, but they don’t get better because it’s a migraine,” Dr. Nieto says. “The pain can really be anywhere in the head.”

He says because migraine pain can be different for everyone, more serious disorders that need immediate medical attention can be mistaken for migraines. Head to the nearest emergency room if you experience any of these symptoms:

Finding help for the pain

Luckily, if you’re one of the 28 million Americans who suffer from migraines, there are many treatment options available. Some help to curb migraine pain once it’s started, while others can prevent migraines from ever occurring, including calcitonin gene-related peptide (CGRP) inhibitors. These injectable medications were just approved in 2018.

“This novel therapy has changed the game for migraine treatment,” Dr. Nieto says. “It’s a really exciting time for the treatment of migraines with all of the tools we have available.”

If migraine pain is a menace in your life, let a doctor on the Methodist Mansfield medical staff help.