In the months after getting a new liver, most transplant patients return to work, enjoy time with their families, and go back to hobbies they love. Mike Barker took it a step farther — actually, 13.1 kilometers farther. Just seven months after his liver transplant, Mike crossed the finish line of the 2019 Cowtown Half Marathon wearing his signature “Running on Recycled Parts: Transplant Recipient” T-shirt.

Mike wasn’t always a long-distance runner. In fact, he didn’t even start running until his early 40s.

These days the 55-year-old Irving resident is still finishing half- and full marathons, but now he runs for more than the sheer pleasure of it. He runs in gratitude for winning a decadeslong health struggle and the organ transplant that made crossing the finish line an incredible journey.

A history of health challenges

“I struggled with severe digestive issues throughout my early adulthood,” Mike says. “The symptoms became more severe and frequent as I got older.

“In 2013, on the flight home from a work trip in China, I was so incredibly sick that I went to see my doctor as soon as I landed. He sent me immediately to the hospital.”

As ill as he was, Mike remembers a sense of relief. During his hospitalization, he was referred to The Liver Institute at Methodist Dallas Medical Center, where doctors finally identified the medical issues causing his symptoms — an answer he’d gone without for years.

Mike learned that he had two chronic inflammatory disorders. The first, hepatitis, affects the liver; the second, primary sclerosing cholangitis (PSC), affects the bile ducts. Both can lead to liver scarring.

Which is how Mike ended up on a liver transplant list at the direction of his doctor, Jeffrey Weinstein, MD, medical director of liver transplantation and hepatobiliary services at The Liver Institute.

After the diagnoses, Mike did his best to stay active but still struggled with declining energy levels, medication-induced diabetes, and recurring infections — all of which took their toll on his body and his ability to keep logging miles.

“Mike didn’t let his illnesses get the better of him, but I knew I needed to make an appeal to the transplant review board to move him higher up the list,” Dr. Weinstein says. “He definitely met the criteria for an appeal. Recurring life-threatening infections in his bile ducts put him at risk for septic shock.”

Dr. Weinstein told Mike that it could take a few weeks to get an answer from the board and encouraged him to stay positive. Just a few days after that conversation, Mike’s wife, Fatima, woke him up around midnight because someone was knocking loudly at the front door. When he answered the door, an Irving police officer handed him a piece of paper with a phone number on it and told Mike to call it immediately, that the hospital had been trying to reach him all night. A donor liver had been found. 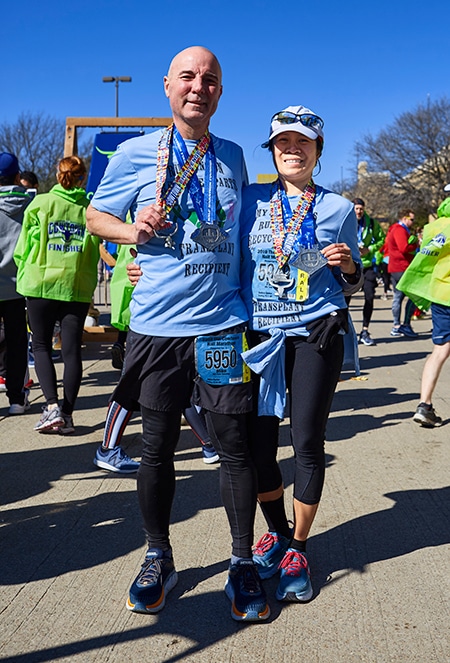 He shocked them all

Mike still remembers waking up from his transplant surgery feeling better than he had in a long time. He was eager to honor his organ donor, and what better way to do that than to get back to what brings him joy — running.

Mike shocked his doctors, his family, and even himself by completing the Cowtown race.

“Even with a new liver, I wasn’t sure I would get to enjoy running and races again,” Mike says. “I’ve always been blessed beyond measure, but these days, it is even truer. I am surrounded by a loving wife and children, I became a grandfather this year, and I’m able to run again.”

Mike and his wife plan to continue running races, wearing shirts honoring his donor and bringing awareness to organ donation. Since his surgery, he believes he has a mission to encourage more people to learn about organ donation to help save lives like his own.

Learn how you can save a life and become an organ donor.