Raising a toddler in the midst of a divorce, Salyndria Gregory already thought she was facing an uphill battle. But then she learned she was facing one of the most aggressive forms of breast cancer. At only 36 years old, Sal, as she’s known to friends and family, didn’t know where to turn for support or how she could find others who had gone through the same struggle.

Now Sal is helping others find the answers.

Fighting cancer isn’t new territory for Sal. Prostate cancer took her father when she was just 13, leaving Sal and her mother to survive alone. But nothing could have prepared Sal for facing her own cancer.

Her reality began to unravel on a much-needed girls weekend. “I discovered a lump while I was showering,” Sal recalls. Six weeks later, she was diagnosed with triple-negative breast cancer. It’s one of the most aggressive forms and can be extremely difficult to cure due to limited treatment options for preventing recurrence. “Cancer scared me so much because I remembered what my dad went through and what it did to his body,” Sal says.

Cancer took its toll on her body, as well. Sal’s treatment included a double mastectomy and three months of chemotherapy, followed by reconstructive surgery. No small feat physically; it’s even harder emotionally.

Sal’s experience with her father showed her how critical it is to have support while facing cancer. “I really leaned on my mom and grandma, but there seemed to be no one out there my age who was going through breast cancer themselves,” she says. “Even though I had friends, I felt alone.” 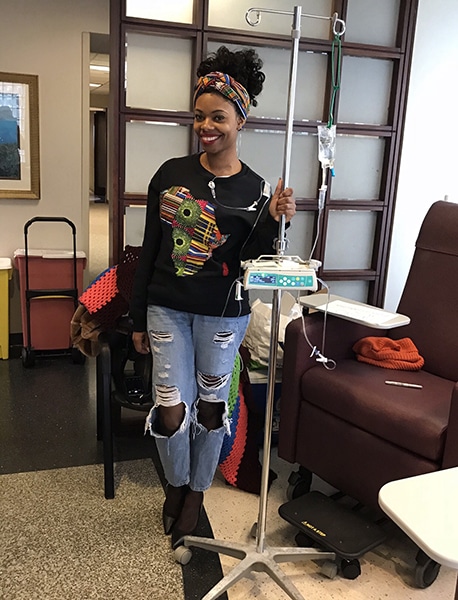 She discovered Young Survival Coalition® (YSC), a national organization dedicated to providing support for women under 40 who are fighting breast cancer. The group also provides support for their family and friends.

Sal relied on YSC’s online resources for research, but it wasn’t until a distraught visit to her doctor at Methodist Dallas Medical Center that she was urged to get more connected.

“I was going through a lot emotionally,” she recalls. “I was depressed for a while and having nightmares about the chemo itself. The nurse emailed me information about a support group that turned out to be YSC’s Face2Face network.” Unfortunately, the group was inactive.

“I went through chemo and treatment alone,” Sal recalls.

Ameen Habash, MD, plastic surgeon on the medical staff at Methodist Dallas, emphasizes the importance of emotional support during cancer treatment and recovery.

“Sal’s story is much more common than we realize,” he says. “Finding someone to help you understand that you’re not alone in this process is critically important.”

Sal may have gone through cancer alone, but she didn’t do it quietly. Her personality shone through even in the midst of chemo. “I told myself, ‘Someone has to survive it — why can’t that be me?’ Even when I showed up at chemo, I put my wig on, all my makeup, and wore my heels. I was determined to look my best.”

Sal Gregory celebrates being cancer-free with her son, Jalen, during a family photo session at Klyde Warren Park.

So what helped Sal shine? In addition to her mom’s unfailing presence and help, she says the key was transitioning from a mindset of fear to a mindset of faith. She was determined to turn her negative experience into something meaningful.

Toward the end of her treatment, Sal discovered that YSC was considering closing the Dallas Face2Face network if they could not find someone to run it. She took matters into her own hands and volunteered to step in as the Face2Face coordinator. “I didn’t want them to close the Dallas chapter. That means there is someone else just like me who would have to go through their cancer journey alone.”

Although they often have the same treatment, side effects, and concerns about life, the toll on premenopausal women can be different than the typical issues postmenopausal cancer survivors face.

“You worry about things like not being able to have children and, if you’re dating, explaining to someone that you have cancer and why your body has so many scars,” Sal says. “You’re also at a prime point in your career, trying to prove yourself and advance.”

Sal has definitely proven herself victorious over cancer. She volunteers at YSC creating opportunities for breast cancer warriors in the Dallas area to connect through support meetings, outings, healthy eating education, and other outlets.

Thanks to Sal, the young survivors now have an opportunity to find their own strength and hope, knowing they aren’t fighting their battles alone.

Learn more about YSC by visiting their website. For information on the cancer support programs available at Methodist Health System, call 214-947-6296.