*Note: Some images in this article are medically graphic and may be disturbing to some readers.

Mike Matthews was living with a very unhealthy liver — even though he rarely drank alcohol. Many of us assume someone who has liver disease struggles with alcoholism, but not Mike. When the North Texas man was diagnosed with a fatty liver, he wasn’t sure what that meant.

“They told me to eat healthy and exercise, which is what doctors tell everyone,” Mike says. The father of four, grandfather of eight, and great-grandfather of two admits he didn’t necessarily follow that advice. What he failed to realize then is this: fatty liver was one of the first indications that his liver was failing. “No one said if you don’t change you will get cirrhosis,” Mike says. “By the time I went to Dr. Mantry, my liver was already cirrhotic.” In fact, before long, Mike found himself near death and in need of a transplant. 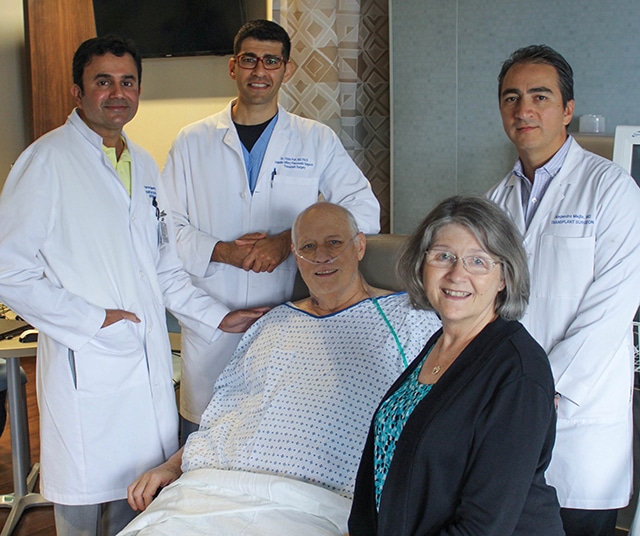 Mike and his wife, Patty, with his team of doctors at Methodist Dallas.

What is a fatty liver?

Parvez Mantry, MD, gastroenterologist and transplant hepatologist with The Liver Institute at Methodist Dallas, says that having a fatty liver is just what it sounds like: “an abnormal amount of fat has been deposited into your liver.” That’s so alarming because your liver is responsible for distributing nutrients throughout your body.

Dr. Mantry says Mike has plenty of company. Nonalcoholic Fatty Liver Disease (NAFLD) is the most common form of chronic liver disease in the United States. Close to 25% of Americans are affected by it. It isn’t curable but you can exercise, modify your diet, and work with your physician to help prevent it from escalating into something more serious.

In Mike’s case, his NAFLD turned into Non-Alcoholic Steatohepatitis (NASH), which is a more aggressive form of fatty liver disease that affects many people who are obese or struggle with issues such as diabetes or high cholesterol. Dr. Mantry treated Mike for nearly four years and says many fatty liver patients like him fail to address their issues early, which leads to more problems down the road.

By the time Mike started seeing Dr. Mantry, he was showing signs of liver failure. It became so bad that a liver transplant was the only way Dr. Mantry could see his patient surviving.

“There are no words to express my gratitude and appreciation for the gift of life,” Mike says. “I pray the donor’s family has peace knowing their loved one was able to provide life for others.”

How did we get here?

How did having a fatty liver escalate into needing a life-changing surgery? Dr. Mantry thinks it’s because many fatty liver patients don’t have symptoms when their liver is suffering. They think everything is fine, until it’s not.

The hepatologist says he and his team at The Liver Institute often have to remind patients that something is seriously wrong, even if they don’t feel it. Dr. Mantry says his ultimate goal is to heighten the awareness of patients and their physicians of these “silent diseases” so a transplant isn’t the only chance of survival. 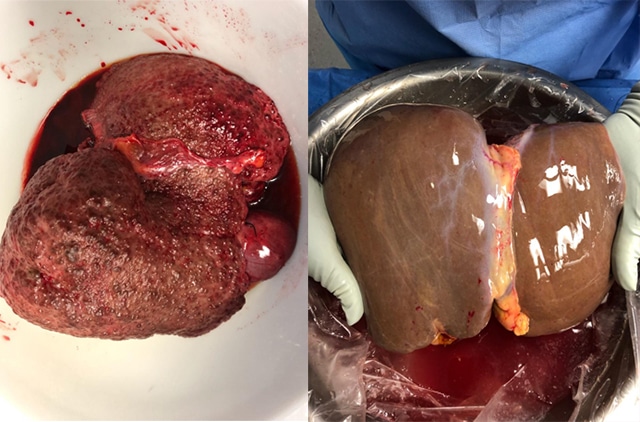 Mike’s liver was failing (left) and he was in desperate need of a transplant. You can see the stark difference between his unhealthy liver and the donor’s liver.

Time for a transplant

Mike had to put in some work to get ready for surgery. Dr. Mantry encouraged his patient to lose weight and lower his hemoglobin A1C level so his body would be in the best shape possible before the procedure. “If a patient doesn’t change their unhealthy lifestyle, a transplant will not be successful,” Dr. Mantry says.

Mike says the push he received from his physician made all the difference, but now he needed a donor.

The first time the transplant team at Methodist Dallas thought they had found a liver for Mike, it wasn’t a match. Ultimately, the call came on Sunday, Aug. 11. A deceased donor’s liver was a perfect match for Mike.

“There are no words to express my gratitude and appreciation for the gift of life,” Mike says. “I pray the donor’s family has peace knowing their loved one was able to provide life for others.”

Alejandro Mejia, MD, executive program director, organ transplantation, and Vichin Puri, MD, transplant surgeon, both on the Methodist Dallas medical staff, performed the transplant. Mike went into surgery on a Sunday night and was out of the operating room early the next morning.

Now that he has a new liver, he’s already thinking about ways he can help others. He doesn’t want anyone else to fail to take their fatty liver seriously. He also encourages every liver patient to find a physician who really cares about them. Mike says he was surrounded by “angels” during his stay at the hospital — which includes all the nurses and doctors who helped him reach this point.

“I got doctors who gave me my life back and I can’t ever repay that debt to them,” Mike says. “I just feel really blessed.”

Read more about services offered to patients at The Liver Institute.