Little Daniella was due in February 2018. But on a mid-December Saturday, Erica couldn’t feel the baby moving.

“We tried playing music and shining a light on my belly to wake her,” Erica says. “Sunday morning, I had a big meal. That would usually wake her. After 30 minutes, I said, ‘This isn’t normal.’”

Prepared to care for moms and babies

After talking to the physician on call at her OB-GYN’s office, Erica went to Methodist Mansfield Medical Center to make sure everything was fine.

Since Erica had previously had a wonderful experience delivering her daughter Isabella at Methodist Mansfield, she knew the hospital had everything to provide expert care for her and her baby.

Methodist Mansfield has a dedicated obstetrics emergency department (OB/ED), with specialists on hand 24/7 to care for expectant mothers and their unborn infants. The OB/ED team began monitoring Erica and saw that the baby’s heart rate was fluctuating dramatically. Erica was started on medications to help the baby and admitted to the labor and delivery unit for overnight observation.

During an ultrasound, the baby showed signs of increasing stress and more frequent heart fluctuations. The Methodist Mansfield team consulted with a high-risk obstetrician, and they decided to deliver Daniella immediately. 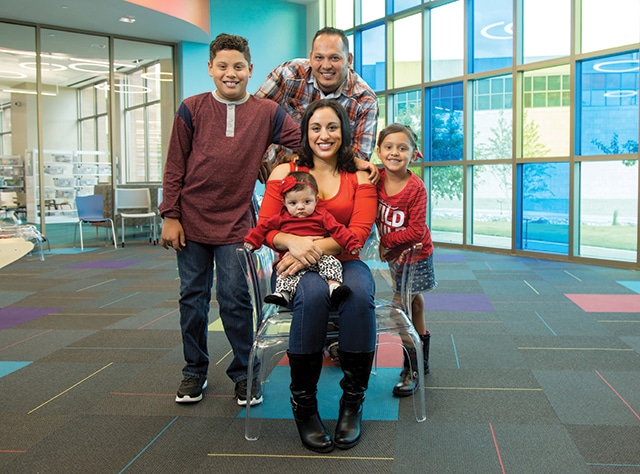 The Diaz family is relieved that their newest member, Daniella, is doing well after spending 75 days in the NICU at Methodist Mansfield.

At 29 weeks, Daniella should have weighed about 3 pounds, but she was just 1 pound, 7 ounces — the size of a 24- to 25-week preemie. A problem had developed with Erica’s placenta, preventing adequate nutrition from reaching Daniella during her last weeks in utero.

Had Erica not come to Methodist Mansfield when she did, Daniella might not have survived. The baby spent her first 75 days receiving vital blood transfusions, oxygen, and nutritional support in the hospital’s neonatal intensive care unit (NICU), equipped to care for babies as young as 23 weeks.

“It is crucial to have the OB/ED, labor and delivery, and NICU services located together at Methodist Mansfield,” says Paul Lansdowne, MD, FACOG, CPE, OB hospitalist on the medical staff at Methodist Mansfield. “Sometimes it makes a critical difference in the outcome for a mother or baby.”

WATCH: Erica Diaz and her husband, Mario, thought their third pregnancy was progressing normally. She blamed her exhaustion on being too busy. After all, she was also running a home-based business and caring for her 10-year-old son, Aaron, and 6-year-old daughter, Isabella.

Today, Erica and her family are grateful that Daniella is doing well and developing on track.

“My baby was so small,” Erica says. “The nurses and doctors were awesome. If it weren’t for them, she wouldn’t be here. Methodist Mansfield is my hospital.”

Dr. Lansdowne says that is the hospital’s goal — to be there for all families in the communities it serves.

“You can expect the best at Methodist Mansfield,” Dr. Lansdowne says. “Bringing new life into the world is precious, and we focus on the patient experience to make it the best and provide the highest quality of care.”

The nationally recognized women’s services at Methodist Mansfield are here for you. Learn more about our family-centered OB-GYN care close to home.