Endoscopic procedures offered relief for one patient after he was diagnosed with esophageal cancer and problems swallowing.

At age 57, Tim Elbrecht was healthy, fit, and extremely active. He owns an Austin-based home-building company and spends a lot of time at construction sites when he’s not golfing or enjoying the outdoors in his off-hours.

So when he got sick with two unrelated gastrointestinal issues, he found it tough to swallow — quite literally.

Tim was diagnosed with Zenker’s diverticulum — a swallowing issue that normally affects people decades older — and cancer of the esophagus. He was hardly a prime candidate for either disease.

“I’ve never seen anyone having both these medical issues at the same time,” says Prashant Kedia, MD, medical director of interventional endoscopy at Methodist Dallas Medical Center. “It’s just by chance he happened to have them both.”

CHOOSING A SCOPE OVER A SCALPEL

Tim lives in Austin, but his doctor sent him to Methodist Dallas for the state-of-the-art endoscopic procedures found in only a handful of Texas hospitals.

“Endoscopy is evolving so rapidly,” Dr. Kedia says. “What you could do with endoscopy a decade ago has barrelled forward so fast. It’s amazing what we can do and how many more diseases we can cure with an endoscope and not a scalpel.”

Gastroenterologists can use an endoscope, essentially a tube with a camera on the end, to get an unparalleled look inside organs.

“When we see polyps, we can use a tool such as forceps to grasp them off or a snare to cut them off,” Dr. Kedia says. “When the growth is large and invasive, we may not be able to do that with standard tools.”

But getting a closer-up look inside an organ is just the beginning with modern endoscopy, thanks to a procedure called endoscopic submucosal dissection (ESD).

“ESD allows us to tunnel under the entire lesion and carve it out from underneath using advanced microsurgical tools through the endoscope,” Dr. Kedia says. “It allows us to remove larger cancerous lesions in one piece, cure the patient, and reduce rates of recurrence.” 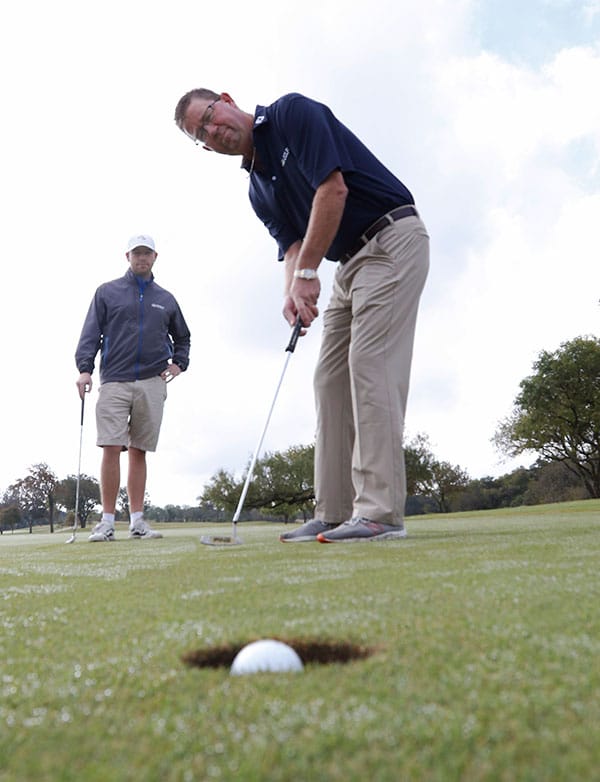 Tim Elbrecht golfing and enjoying life back on the green after his time at Methodist Dallas.

GETTING HIS QUALITY OF LIFE BACK

Dr. Kedia and his team at Methodist Dallas removed Tim’s cancerous growth in early September. He didn’t even need to spend the night in the hospital.

“It was awesome technology,” Tim says. “I was very pleased.”

Subsequent biopsies have shown that Tim “is cured of his cancer,” Dr. Kedia says. But there was another problem to solve.

Zenker’s diverticulum causes a pouch to develop on the esophagus, the muscular tube connecting the mouth to the stomach. Once this pouch forms, it can retain food, making swallowing difficult.

“The ridge of the muscle is so tight and creates a high-pressure zone, which causes the esophagus to bow out,” Dr. Kedia says.

In the past, such a diagnosis would mean surgery. But Tim’s second procedure, a few weeks after the first, was also carried out using an endoscope.

“You cut the pouch using a special technique” known as a Zenker’s peroral endoscopic myotomy (Z-POEM),” Dr. Kedia says. “The pocket opens and food is able to slide downward.”

Thanks to this relatively new procedure, Dr. Kedia says Tim will be able to have his quality of life back.

Tim says it’s back already, just a few months after his procedures, and he is beyond grateful for the expertise and care demonstrated by everyone associated with his case.

“The hospital experience was phenomenal,” he says. “Everybody I came in contact with was kind and helpful.”

Tim admits he was scared after his diagnosis, but having his wife, Cindy, and the rest of his family in his corner has meant the world to him.

“Having positive people around me is helping me work my way through all this,” he says. In addition to his family, Tim was comforted by the support from his medical team, including Dr. Kedia and the staff at Methodist Dallas.

“I could see their eyes behind their masks,” Tim says. “I could tell they cared, and that meant a lot to me.”

VIDEO: Teacher overcomes paralysis to get back in the classroom
Teen survives crash thanks to ECMO lung bypass machine
Face masks are now a COVID-19 must, so make yours count
When a pain in the neck signals something deadly