When COVID-19 stole her strength, and nearly her life, Letitia Lewis-Robinson proved her resilience during her recovery, when the most routine tasks became a daily struggle.

At 58 years old, Letitia never imagined she would have to relearn how to complete simple tasks, such as holding her cell phone, standing, walking without help, and eating solid food.

But that was her reality after contracting COVID-19 in early April and spending nearly a month at Methodist Dallas Medical Center.

Letitia’s illness started with a cough and fever that quickly spiraled into something far more serious.

“I was taking cough syrup and headache medicine, but nothing seemed to work,” she says. “So I called the emergency department.”

As it turns out, calling Methodist Dallas was the best thing Letitia could have done.

“I had no idea it was going to get so serious,” Letitia says. “I thought if I got it, I could just see a doctor and recover at home. But that didn’t happen.”

Letitia was taken almost immediately to the intensive care unit. That’s where she met Raghu Krishnamurthy, MD, pulmonologist on the medical staff at Methodist Dallas.

Her oxygen levels were extremely low, says Dr. Krishnamurthy. But her spirit is what really stuck with him. He found her sitting up in bed, struggling to breathe, but still trying to manage her bills over the phone.

“This was an unusual sight for me in the ICU,” he says. “She was taking deep breaths. She told me, ‘I don’t want to run out of breath during my conversation.’”

But within a few days, it was clear Letitia would need the help of a ventilator to breathe. She developed pneumonia and later acute respiratory distress syndrome (ARDS), a potentially fatal complication.

Doctors treated Letitia with remdesivir, an antiviral drug at the center of several clinical trials as a way to combat COVID-19, Dr. Krishnamurthy explains.

If given in the early stages of infection, remdesivir can effectively limit viral replication by interfering with an enzyme that the coronavirus needs to survive. Public officials have touted it as a potential “standard of care” for reducing the recovery time and severity of COVID-19.

For her part, Letitia says her memory of the ICU is hazy. She needed to be sedated for the ventilator to work, but her family kept in contact with doctors and nurses.

“It was really touch-and-go for a while,” says Letitia, thinking about details her sister told her. “But God allowed me to live.”

After two weeks, Letitia gradually became well enough to breathe on her own again.

“When they took me off the ventilator, I didn’t feel that sick,” she says. “But I do remember that I couldn’t lift my head, my arms, or my legs. I couldn’t move anything, so that was scary.”

“She had severe muscle weakness from her lengthy hospital stay,” says Lauren Hoffman, MD, internal medicine specialist on the medical staff at Methodist Dallas. “I think it was really distressing for her, but she was such a motivated patient.”

The biggest victory came three days later when Letitia tested negative for the coronavirus, officially allowing her to move on to physical therapy.

“That was a very rewarding conversation, getting to tell her that she beat COVID-19,” Dr. Hoffman says. “She’s a survivor. There were definitely tears of joy in that moment.” 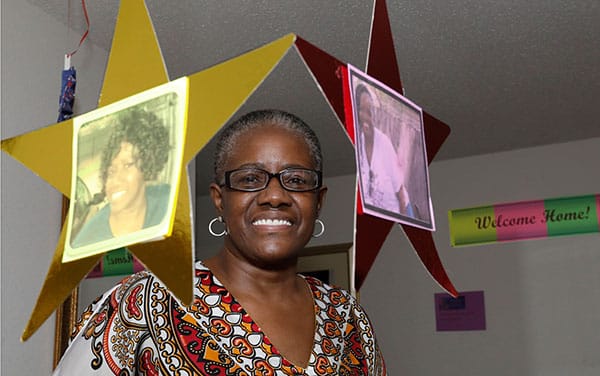 Letitia, celebrating her recovery from COVID-19 with the help of Methodist Dallas

Back on her feet

When Letitia got to the Methodist Rehabilitation Hospital, there was a lot of work left to do.

She still couldn’t control her arms or legs and needed help with tasks as simple as combing her hair, walking to the bathroom, and eating, says Hima Doppalapudi, MD, physical medicine and rehabilitation physician on the medical staff at Methodist Dallas. Not to mention she still needed to be given oxygen and was having difficulty speaking clearly.

“Our goal was to get her stronger so that she could be functionally independent, wean her off the oxygen, and help her to swallow normally again,” Dr. Doppalapudi says.

In about three weeks, Letitia graduated from staying in bed to using a wheelchair, before improving enough for a walker. She relearned how to shift from a sitting position to standing.

“Everybody was so happy because they knew how far I’d come,” Letitia says. “They were encouraging — the nurses, the dietitians, the social workers, and even the lady down in the cafeteria.”

Letitia remembers her last day of rehab. Dozens of hospital staff came to see her off.

“It was like the whole world was down there, waiting for me to walk out the door,” she says.

Her father stood at the end of the long line of well-wishers, ready to take her home.

“Going from laying on my back doing nothing to leaving on my feet with a walker, it was a beautiful moment,” she says.

Blood types and 5 other potential risk factors for COVID-19.

COVID-19 or 'cedar fever' allergies? How to tell the difference
Four kidney transplants in one family at one hospital
Would you know a stroke if you saw it?
When choosing a plant-based milk, consider the nuts and oats

This avid golfer from Austin came to Methodist Dal