Pastor Barry Cameron’s weekend services didn’t seem unusual. However, he didn’t know that in the sea of faces at Crossroads Christian Church that Sunday was the cardiologist who would save his life later in the week.

After wrapping up his Sunday services, Barry hopped on a plane with his wife, Janis, and planned to indulge in a week of conference-going and golfing in the Bahamas.

Throughout the conference, fatigue and shortness of breath plagued Barry. The swelling in his right leg was also out of the norm. During a layover in Miami on May 8, on his way back to Dallas, he realized he needed medical attention.

“I called my daughter Katie, told her about my symptoms, and asked her to call my doctor,” Barry says.

When he touched down back home that evening, the 63-year-old senior pastor of Crossroads got a call from his family physician, Nancy Georgekutty, MD, on the medical staff at Methodist Mansfield Medical Center. She persuaded Barry to go straight to the emergency department (ED).

The emergency medical team at Methodist Mansfield determined that the pastor had sick sinus syndrome, a condition in which the heart’s natural, built-in pacemaker doesn’t function properly. Just as Barry arrived at the hospital, his resting heart rate plummeted to 20 beats per minute, far below a normal 60 to 100 beats per minute.

“In a matter of minutes, it all went downhill,” Barry says. “They gave me medicine to get my heart rate up and admitted me.”

Barry credits the decisions made by the ED staff that night for saving his life. They told him that Curtiss Moore, MD, electrophysiologist on the Methodist Mansfield medical staff, would be implanting a pacemaker in his chest the next day. Surprisingly, Dr. Moore recognized his new patient.

“Dr. Moore came in and said, ‘I know you,’” Barry recalls. “I call that providence, not coincidence.”

Dr. Moore had been in the congregation at Crossroads the previous Sunday, where he had been encouraged and guided by the words of Barry’s sermon. Now it was his turn to help the pastor.

“Pastor Cameron’s heart rate was so low that he had heart-failure-like symptoms,” Dr. Moore says. “His heart was pumping blood well, but it wasn’t pumping fast enough. Patients often say they feel like they’re running a marathon even though they’re not doing much.” 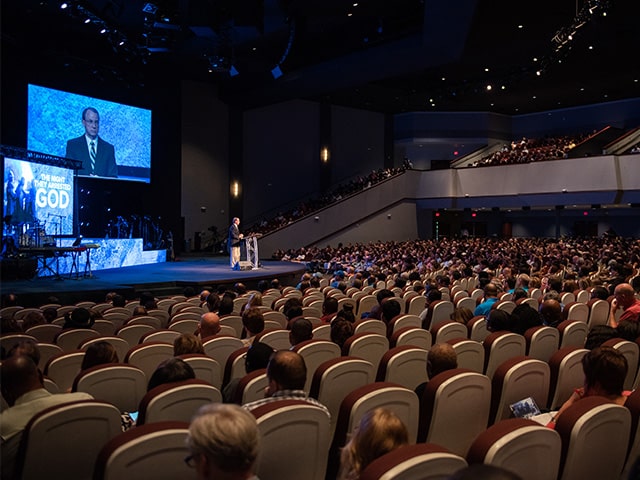 Picking up the pace

On May 9, Dr. Moore implanted a pacemaker in Barry’s chest, doubling both his heart rate and blood oxygen level.

“Now when the pastor’s heart rate gets too low, the pacemaker takes over and pumps enough blood so he doesn’t feel tired all the time,” Dr. Moore says.

After the procedure, Barry spent one night in the hospital and says the care he received during his stay was first rate. He’s even bragged to his congregation about many of the nurses by name.

“Every bit of my experience with Methodist Mansfield was terrific,” Barry says.

Before leaving the hospital the next day, he asked Dr. Moore what would have happened if he hadn’t gone straight to the ED.

“He said I would have passed away within hours,” Barry says.

Just three days after surgery, Barry was back in church, preaching to his congregation on Mother’s Day. He says his experience has taught him some spiritual lessons.

“I thought I was fine, but I wasn’t,” he says. “Katie initiated the whole process of getting me the help I desperately needed — thank God for family. My doctor convinced me to postpone dinner and make this a priority — thank God for a persistent doctor.

Today, Barry says he has the energy level of a 30-year-old.

“I’m the new poster child for this pacemaker,” he says.

VIDEO: How hospitals put your safety first amid pandemic
QUIZ: How much do you know about childhood vaccines?
Florals just might be your cup of tea
Mission trip to Honduras helps patients ‘get their life back’