“I was told more than once that it was a miracle I survived,” recalls 27-year-old Miraf Assefa. “Sometimes I can’t believe that I did.”

On the morning of Feb. 28, 2017, Miraf was awoken by the sound of music coming from the living room of the Dallas home he shared with a friend. When he walked into the room, he came face to face with an intruder who immediately shot him in the abdomen with a 12-gauge shotgun. The intruder followed Miraf into his bedroom and fired a second shot, this time into the side of his hip.

“I’m on the floor, and I see my intestines and look up and beg the guy to not shoot me again,” Miraf recounts. “I decided to pretend to take my last breath in hopes he would just leave, which he eventually did. I had a few moments where I felt myself floating above my body, but then something in my head snapped and I knew it wasn’t my time to go.”

Unable to walk or crawl, lying on his back, Miraf used one hand to hold in his intestines and used his uninjured leg to push himself partially out the front door. Some passing pedestrians heard him yelling for help and called 911.

“When I heard the sirens, I knew I was going to be okay,” Miraf says. “I remember hearing the paramedic ask the driver, ‘Where are we taking him?’ and the driver immediately said, ‘Methodist.’”

Minutes count in an emergency

“We immediately recognized the severity of Miraf’s injuries,” Dr. Amos says. “He had a devastating penetrating blast injury, like the type you might see on a military battlefield. After operating on him for nearly six hours, we were finally able to stabilize his condition. It was touch-and-go the entire time.”

Miraf would end up spending two months in the intensive care unit at Methodist Dallas, having countless surgeries before being discharged to a rehabilitation hospital for another 2½ months before finally going home. 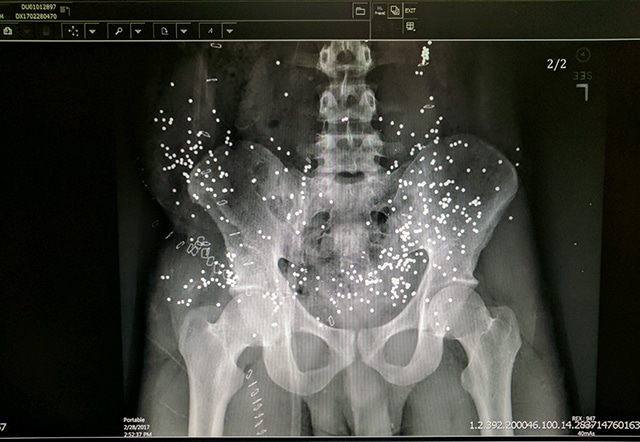 This X-ray image shows how gunshot pellets had dispersed throughout Miraf Assefa’s pelvis and abdomen after a home intruder shot him twice.

Experience and expertise at Methodist Dallas

“I often wonder why the paramedics chose Methodist over another hospital,” Miraf says. “They must have known it’s where I needed to be. I’m so grateful for all the surgeons, doctors, therapists, and nurses who cared for me at Methodist. I wouldn’t be here without them.”

Methodist Dallas became one of three adult Level I trauma centers in Dallas County in 2014. Level I is the highest attainable trauma center designation awarded by the American College of Surgeons. Hospitals with this designation are required to lead their communities in research and injury prevention. They also must have trauma surgeons in house 24 hours a day, along with prompt availability of surgeons in numerous surgical subspecialties.

“The trauma team at Methodist Dallas has set a high standard,” Dr. Amos says. “The surgeons are board certified in both surgical critical care and general surgery. Plus, our team has almost a dozen years’ experience working together, so when patients like Miraf come in with complex, life-threatening injuries, we know how to provide them with high-quality care.”

Dallas-Fort Worth relies on the trauma services at Methodist Dallas every day because when it comes to life-threatening injuries, finding the highest-level trauma center in the quickest amount of time can mean the difference between life and death.

WATCH: After being shot twice in the stomach with a shotgun at close range, Miraf Assefa was brought to Methodist Dallas, where J. Darryl Amos, MD, and the trauma team were able to provide comprehensive Level I trauma care, saving his life.

Read about different trauma levels and what they mean when it comes to emergency care.