Dana Brown felt tired, but there were plenty of ways to explain that away. After all, the jail supervisor for the DeSoto Police Department was also busy pursuing her master’s degree in social work.

“I was really tired and exhausted all the time, and I was hardly getting any sleep,” she remembers, noting that her symptoms were very relatable for many other women in their late 40s.

Still, Dana Brown knew there was something more going on.

“I would notice my heart would beat extremely fast, to the point of me feeling dizzy,” Dana says.

It would happen while she was in the kitchen baking or simply doing dishes, even while she was driving. For years, doctors told her it was stress, and that she was probably just tired.

Thinking she had the flu, Dana visited her doctor and found out that she didn’t have the flu — nor did she have stress or fatigue. Her heart was racing at a whopping 230 beats a minute. Dana was diagnosed with supraventricular tachycardia (SVT), a big name for a condition that’s surprisingly simple to understand. Amit Guttigoli, MD, a cardiac electrophysiologist on the medical staff at Methodist Charlton Medical Center, describes it as “a short circuit in the heart’s electrical system that makes the heart rate really fast.”

And there was good reason it took Dana so long to get a diagnosis.

“In order for a doctor to pick up SVT on an EKG, it has to be happening as you’re being seen. In fact, they couldn’t pick it up for a long time because it would never ‘SVT’ while I was there,” Dana explains

At Methodist Charlton, Dana was given the option of taking a pill for the rest of her life or having a cardiac ablation, a minimally invasive procedure to zap or burn the extra pathway that was causing the heart to race.

“I decided to stay on the pill for a while,” Dana says, hesitant to have anyone “messing around” with her heart. After all she had been through, who could blame her?

But about a year later, she was driving home from work and started to get dizzy. She called OnStar, and the operator instructed her to pull over while they called the paramedics.

The medicine was no longer working, so Dana opted for a cardiac ablation. Methodist Charlton had just opened an electrophysiology lab, specially equipped to enable an electrophysiologist to diagnose and treat arrhythmias such as atrial fibrillation, atrial flutter, and SVT. 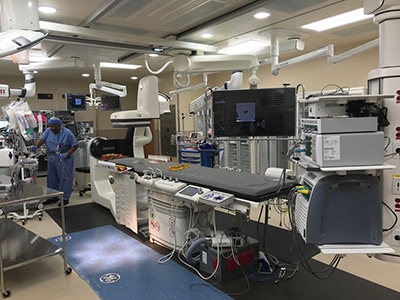 While arrhythmias have traditionally been treated with medication, the lab — just minutes from home for Dana —allows many of these conditions to be treated through minimally invasive procedures. “The EP lab brings the latest technology in heart rhythm management to the community, allowing them to have the procedures they would previously have had to travel far to receive,” says Dr. Guttigoli, who performed the outpatient procedure on Dana in August.

These days, Dana is back in the kitchen without the fear that plagued her for so many years. Because she gave up caffeine early in her SVT journey, she had one last question for Dr. Guttigoli.