The only way to save his life was to amputate. The 4-year-old boy was brought to a Tanzanian emergency room in the middle of the night. He was near death from a broken leg that had turned gangrenous — a result of the poor medical care that he received from a tribal witch doctor.

At that advanced stage, amputating his leg was his last chance at survival, even though doing so would endanger him in other ways. He was part of the Maasai tribe of nomadic herders; because of their roaming lifestyle, the Maasai don’t permit people with disabilities to remain in the tribe. A boy with one leg would be abandoned by his parents — or his family would have to leave the tribe and start a new life elsewhere.

In his fifth year of residency, Edgar Araiza, MD, orthopedic trauma surgeon now on the medical staff at Methodist Dallas Medical Center, made the incredibly difficult decision to amputate the boy’s leg during his three-week tenure as an attending physician at Tanzania’s Kilimanjaro Christian Medical Centre.

Residents set up an operating room for surgery at Kilimanjaro Christian Medical Centre. There was only one anesthesiologist serving the entire hospital.

A different approach to medical missions

Dr. Araiza was in Tanzania in 2017 with Health Volunteers Overseas (HVO), a secular Washington, D.C.–based nonprofit organization that leads trips to various underserved and resource-scarce places around the world. Volunteers educate and train the local healthcare providers, while HVO offers ongoing support after the trip.

“You’re not going there to change their ways but to figure out what they have, what they need, and what you can do to help them so that their results are better,” Dr. Araiza says. “We’re giving them the tools to be more successful.”

It was the third trip of its kind that Dr. Araiza completed during his training, having also visited Romania and Mexico for similar medical service trips. Exchanging medical knowledge with providers in underserved areas is a cause that hits home for Dr. Araiza, who grew up in a part of Mexico that often lacked medical necessities.

During his three weeks in Tanzania, Dr. Araiza’s team observed processes and offered solutions to better streamline patient care. Dr. Araiza also set up a shared drive with the doctors he met there. Once he returned home, he uploaded course textbooks, medical journals, and presentations — everything he would have access to in America — for the team’s continued education. They could also post their own cases in the drive for a second opinion.

“The doctors in Tanzania are very bright with a tremendous amount of knowledge and skills, but they had limited resources to use to their advantage,” Dr. Araiza says. The lack of resources forces providers to get creative with solutions and rely on the basics of medical care, something that Dr. Araiza said providers in the U.S. often forget with the plethora of tools and technology at their disposal.

“A lot of the complications and poor outcomes in the developed world could be avoided if people just stuck to the basics of medicine: anatomy, physiology, and pathology,” Dr. Araiza explains. “The amazing work that the Tanzanian providers can do with limited resources sets a good example to keep the basics at the forefront of how we approach patient care in the U.S.” 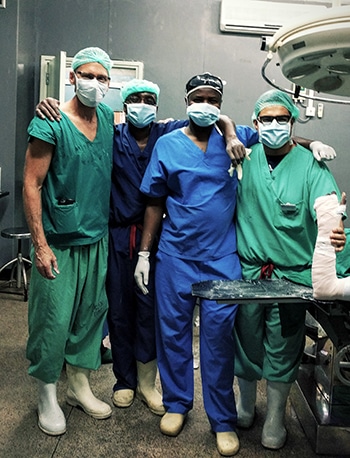 The teacher becomes a student

Dr. Araiza knew that he’d be going abroad to observe and to teach, but he didn’t realize that he’d learn as much as or more than any of the local doctors.

His experience treating the 4-year-old Maasai boy reaffirmed the fact that medical decisions don’t just affect a patient’s recovery process, they have a lifelong impact on a patient’s quality of life.

“That concept has changed my medical practice,” Dr. Araiza says. “If a person wouldn’t benefit from surgery, we don’t do surgery. I treat the patient as a whole rather than just the injury.”

Learn more about the Mission, Vision, and Values that drive Methodist Health System.

Methodist Health System’s mission is to improve and save lives through compassionate, quality healthcare. Our Mission to Medicine series shares the inspirational stories of clinicians extending this mission beyond hospital walls to local, national, and international communities.

Would you know a stroke if you saw it?
VIDEO: Doctors warn COVID-19 immunity may not last
Resident finds higher calling on medical mission trip
What’s safe (and what isn’t) once you’re vaccinated